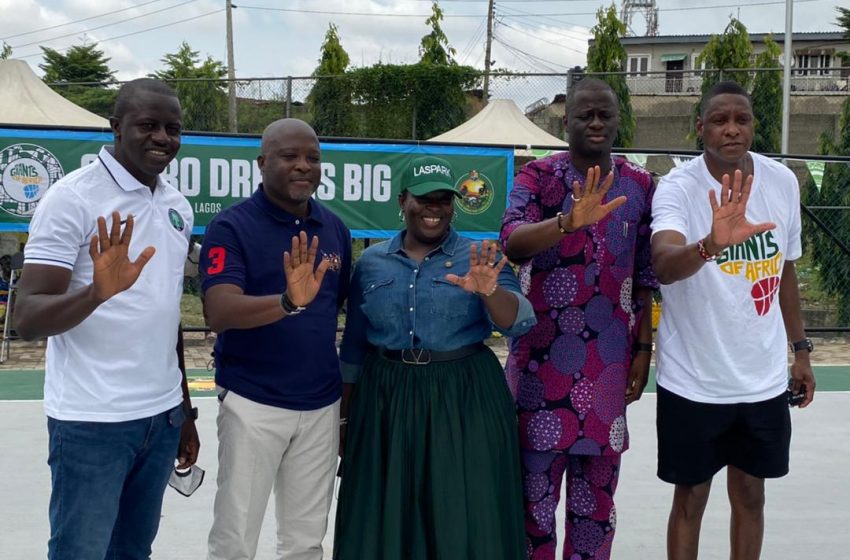 The Lagos State Parks and Gardens Agency (LASPARK) has partnered with Giants of Africa (GOA) to rehabilitate the Oworonshoki Basketball Court.
Speaking at the unveiling of the newly renovated Court on Tuesday at Oworonshoki, the General Manager of LASPARK Mrs Adetoun Popoola said the alliance is in line with the Agency’s mandate to promote recreation and leisure  saying LASPARK approved the rehabilitation of the sporting facility as a Corporate Social Responsibility Project.
Popoola disclosed that GOA is on a mission to use Basketball as a tool to educate and enrich the lives of African youths.
“They have a long term goal to build 100 basketball courts in Africa. Our partnership with them affirms the current  administration’s commitment to creating safe environments for social engagements as well as contributing to lower crime rates within the communities”. She added.
Also speaking,  the Chairman of Lagos State Sports Commission Mr Olushola Aiyepeku stated that the unveiling of the renovated Court is significant partnership which represents  continuous manifestation of what the Lagos State Government is all about.
He noted  that the government will continue collaborations that will  bring about meaningful youth development in the State.
The founder of GOA Masai Ujiri, a National Association of Basketball (NBA) Champion and President of the Toronto Raptors Basketball Club in his speech express gratitude to LASPARK  for  the seamless process through which GOA got approval for the rehabilitation of the court.
He thanked the youths for their presence noting that the Court is remodelled to inspire them, urging relevant stakeholders to keep the facility safe for the youths to play and boost their development.
“You can start here, build, grow and become bigger in the NBA sports like notable players who have  gone under tutelage of GOA and are now playing at the top in NBA. You can also be a sport administrator and use Basketball as a tool to achieve greatness”. He said.