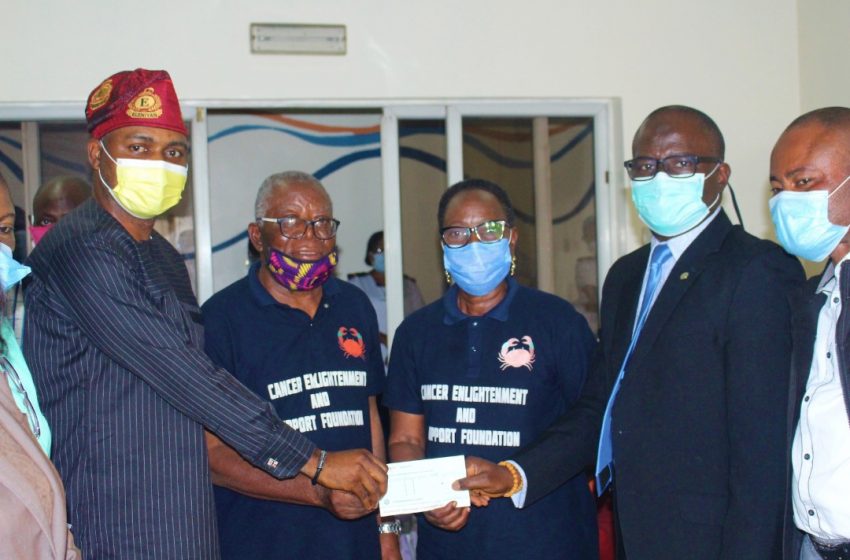 A Non-Governmental Organization, Cancer Enlightenment and Support Foundation (CESUF) made a cash donation to the cancer patients at the Peadiatric ward of Lagos state university teaching hospital (LASUTH), as part of its charity and empathy giving. This donation marked the Foundation’s third anniversary on Tuesday 19th January, 2021.
While giving his address, the Chairman, Board of Trustees of the Organization, Elder Adegboyega Adepitan appreciated the Management of LASUTH for its kind reception. He noted that he is a colon cancer patient survivor and that his fight and covenant with God gave birth to the foundation. He spoke further saying, “for the past three years, LASUTH had been our major concern and we run with the theme, Having Cancer is not a Death Sentence. This had enabled us reach out to the society to educate the citizens that they can live in spite of the illness”, he said.
In his words, “we continue to receive funds requests from indigent patients from hospitals and our most pathetic finding was that children as young as three years old have one form of cancer or the other. This is why we are celebrating our third anniversary with these children in order to lift up their spirits and give as much financial support as we can.”
The former House Committee Chairman on Health, Lagos state, Honorable Segun Olulade thanked everyone present for their time especially the Management of LASUTH as he encouraged the public to reach out to the cancer patients with their widow’s mite adding that humanitarian gesture should not be limited to government organizations alone. He also seized the opportunity to preach against stigmatization stressing that it should be discouraged in our society as we show genuine love and care to the sick.
In his response, the Director of Hospital Administration, Mr. Kehinde Gbajumo representing the Chief Medical Director, Prof. Adetokunbo O. Fabamwo, thanked and saluted the Foundation’s efforts to lift the indigent patients as he received the cash donation on behalf of the Management. He assured them that the children will surely get good care as the donation will be put to good use.