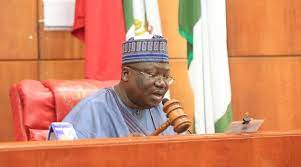 President of the Senate, Ahmad Lawan, has again, lamented the growing insecurity in the country.

He said the biggest challenge that the Federal Government must prioritise and tackle at the moment was the menace, by constant engagement with the legislature.

Lawan stated this on Tuesday in a speech he delivered to welcome senators back from the upper chamber’s two-month annual recess.

He said efforts must be made to sustain the fight against insecurity by ensuring adequate funding for security agencies in the 2022 budget.

He said, “Let me applaud and commend our gallant Armed Forces for the recent success recorded in their fight against insurgency and banditry in our Country.

“I want to urge them to sustain the campaigns until the insurgents and bandits are rooted out in our Country.

“We approved the supplementary budget request of the Executive in July this year, just before we proceeded for the annual summer recess.

“The National Assembly approved over N800bn for our security and intelligence agencies.

“While that provision was appropriate and indeed necessary, we should sustain the trajectory of increase in funds and resources to the security sector.

“Therefore, we should consider a ramp up of more resources for our security agencies in the 2022 Appropriation.

“This also requires that our Defence and Intelligence related Committees must step up their oversight on the Agencies.

“The fight against the security challenges in our country requires continued engagements between the National Assembly and the Executive arm of Government.

“It also requires continues engagements with citizens, for the necessary and desired results to be achieved.

“We must therefore remain resolute and focused in achieving those. The National Assembly, indeed the Federal Government has no more serious challenges to tackle than insecurity today.”

The Senate President underscored the need to set up the implementation committee by the President, Major General Muhammadu Buhari (retd.), to ensure the timely execution of the Petroleum Industry Act assented to on August 16, 2021.

He said, “Before we embarked on our recess we had accomplished the targets that we set for ourselves. We passed the Petroleum Industry Bill and also passed the Electoral Act Amendment Bill 2010.

“These were landmark Legislations targeted at enhancing the Oil and Gas Sector in our Country and improving the Electoral system in our dear Nation.

” We are all aware, Mr. President assented to the Petroleum Industry Bill on 16th August, 2021 making it an Act of parliament.

“Also, the President had set up an implementation committee to start the execution of the provisions of the Petroleum Industry Act.

“I want to take this opportunity to urge the implementation committee to expedite action so that our Country will start to reap the benefits of the law.”

Lawan also charged the Senate Committees on Petroleum Downstream, Petroleum Upstream, and Gas to start oversight on the implementation of the Petroleum Industry Act, with a view to ensuring that the Senate discharges its critical mandate of compliance with contents and dictates of the law.

On the Electoral Act Amendment Bill passed by the Senate and House of Representatives in July 2021, the Senate President announced that a conference committee would be set up to harmonise the two versions of the bill, so as to enable its eventual transmission to the President for assent.

He said, “Both chambers had done a great and patriotic job to increase the integrity and transparency of our Electoral processes and procedures through these amendments”

Lawan added that the constitution review committee would present its report soon to the upper chamber for consideration.