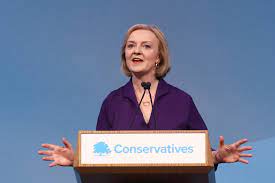 Liz Truss took over as the new UK Prime Minister on Tuesday and promised to tackle the energy crisis created by the Russia-Ukraine war in her first address at Downing Street. Truss is expected to announce plans to freeze energy bills at about £2,500 ($2866) a year until 2024 on Thursday, UK media reports suggest. The country is facing the worst cost of living crisis in a generation and Truss’s survival depends on fixing the problem.

Truss is the fourth Conservative prime minister in six years and succeeds Boris Johnson who was forced out over multiple scandals. She acknowledged the severe global fallout from Russia’s invasion of Ukraine and the COVID-19 pandemic.

The UK PM said, “I will deal with the energy crisis caused by Putin’s war. I will take action this week to deal with energy bills and to secure our future energy supply. I am confident that together we can ride out the storm. We can rebuild our economy, and we can become the modern brilliant Britain that I know we can be.”

However, it seems that the taxpayers will bear the brunt of the decision, to the tune of a whopping $116 billion.

Spurred by the Russia-Ukraine war, UK’s energy crisis is expected to become huge in the coming months. The citizens are staring at unaffordable bills, while the poorest are at risk of riding the winter without any heat at home.

Besides soaring prices, Truss is also faced with a enormous task of boosting the economy and fixing a national health care system burdened by long waiting lists and staff shortages.

Further, Truss promised to scrap plans to increase corporation tax on big firms, and to reverse an increase in a payroll tax on workers and employers, designed to raise additional funding for health and social care, with the extra spending coming from general taxation instead.

Truss also picked her Cabinet and appointed close allies to top jobs such as Kwasi Kwarteng as finance minister, Therese Coffey as deputy prime minister and health minister, and James Cleverly as foreign minister. It was the first time a white man will not hold one of Britain’s four most important ministerial positions.