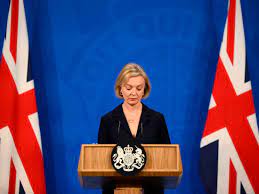 Liz Truss has resigned as the Prime Minister of the United Kingdom, UK, after a month and half in office.

She just made the announcement 24 hours after saying she was a fighter and not a quitter, and so would continue in office.

Liz Truss said she would stay on until a successor is chosen in the next week.

Truss said she was resigning from her position on Thursday after a rising chorus of members of her own Conservative Party called for her resignation.

On Wednesday, there was total chaos when her party members were shouting and swearing at each other at the Parliament.

Truss had faced political issues in the few weeks she assumed office, including two of her party members leaving their positions.

Kwasi Kwarteng was dismissed as Chancellor on October 14 and replaced by a former health Jeremy Hunt, who earlier served as a Secretary of State for Health and Social Care among other posts.

Also, the Home Secretary, Suella Braverman resigned from her office in a letter addressed to the Prime Minister following sending her “personal email to a trusted parliamentary colleague as part of policy engagement.”

In one of her toughest moments during her short spell as the British PM, Truss said, “I am a fighter and not a quitter” while responding to a question from opposition Labour Party leader, Keir Starmer yesterday.