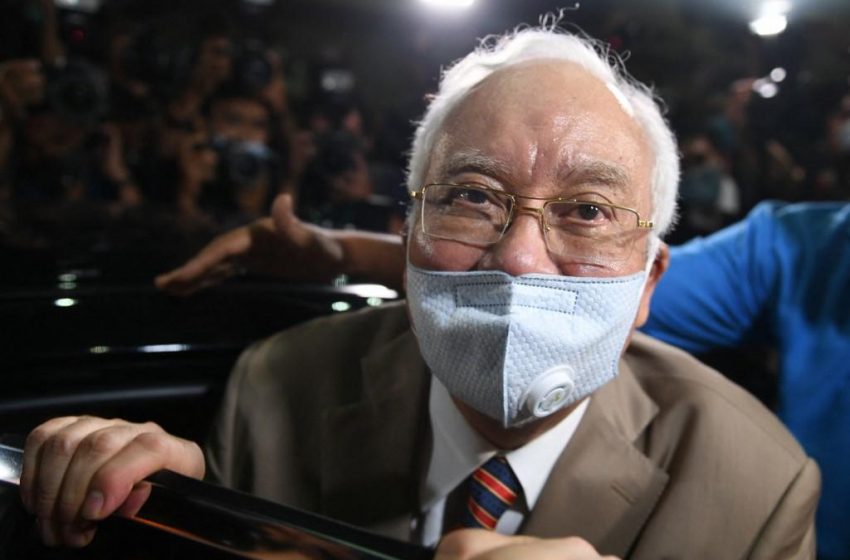 Malaysia’s former prime minister Najib Razak gets into a car as he leaves the Duta Court complex after he was found guilty in his corruption trial in Kuala Lumpur on July 28, 2020. – Former Malaysian leader Najib Razak was sentenced on July 28 to 12 years in jail on corruption charges linked to the multi-billion-dollar 1MDB scandal that led to the downfall of his government two years ago. (Photo by Mohd RASFAN / AFP)

Former Malaysian leader Najib Razak, who has been convicted over the mammoth 1MDB scandal, is in trouble with the law again — this time for breaking coronavirus rules in a restaurant.

He was fined 3,000 ringgit (S$971) for failing to register at the eatery or have his temperature taken, police said.

It came after footage circulated on social media showing the ex-prime minister flouting the rules in March at a Kuala Lumpur restaurant that sells a traditional chicken and rice dish.

While Najib still denies any involvement in the 1MDB fraud, over which he has been sentenced to 12 years in jail, he was quick to admit his misdemeanour at the eatery.

The 67-year-old, who remains free on bail while he appeals the 1MDB conviction, used the incident to highlight other cases in which politicians allegedly broke the rules.

These include an incident when ministers allegedly travelled illegally to another part of the country to attend a wedding.

Maskless Thai PM fined as coronavirus cases spike
“Myself and the man on the street are investigated by police and fined by the government,” Najib posted on Facebook, after the penalty was announced late Thursday (May 6).

“But I don’t know (if this will happen), if government ministers contravene the rules.”

The restaurant owner was also fined 10,000 ringgit for failing to ensure Najib followed the regulations.

Last month Najib revealed he is facing bankruptcy for allegedly failing to pay more than US$400 million (S$533 million) in taxes, which could lead to him losing his seat in parliament.

He was convicted last year in the first of several trials he is facing over the looting of sovereign wealth fund 1Malaysia Development Berhad.

Billions of dollars were stolen from the investment vehicle and spent on everything from pricey artwork to real estate, a scandal that contributed to the downfall of Najib’s government in 2018.

Malaysia is facing an escalating virus outbreak, and this week introduced new curbs in Kuala Lumpur and several other areas. AFP