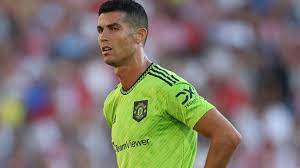 There are indications that Manchester United could receive a late offer for Cristiano Ronaldo before the summer window closes on Thursday.

Ronaldo is eyeing an exit from Old Trafford so he can play in the Champions League this season.

According to Sky Sports News reporter, Kaveh Solhekol, the player’s agent Jorge Mendes has been very busy in recent days trying to find a new club for the 37-year-old.

Solhekol said: “I think there will be options for Ronaldo. It’s touch and go whether he stays at Man Utd.

“His agent Jorge Mendes is out and about, very busy at this time of year, and has been trying to find a new club for him.

“There’s been lots of reports of Napoli, Sporting Lisbon and Atletico Madrid and Chelsea. My understanding is there’s a scenario where United are offered something very late in the window.

“This isn’t 100 per cent fact, but at the last minute on Deadline Day Mendes could go to United with an offer, for instance Chelsea, and makes the point financially it doesn’t make sense to keep a player who Erik Ten Hag has made clear won’t start a lot of games.”