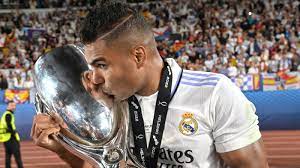 Real Madrid manager Carlo Ancelotti has confirmed that Manchester United target Casemiro has decided to leave the club in search of a “new challenge”. Casemiro has won five Champions League crowns with Los Blancos, making up one of the most iconic midfield trios of all time alongside Luka Modric and Toni Kroos.

Manchester United have switched their focus from long-term target Frenkie de Jong in recent weeks and look set to land the Brazilian, their second signing from the Liga champions in two years. GOAL was able to confirm on Thursday that a £60 million ($72m) deal for the South American was close.

The Spanish champions have a habit of having world class players ready to replace any outgoings at the club, and this deal is no different. Aurelien Tchouameni was signed from Monaco this summer for a fee in the region of €80m (£68m/$80m) and is viewed as many as the long-term successor to Casemiro in the holding midfield role.

Of course Madrid can still call on Modric and Kroos, as well as youngsters Federico Valverde and Eduardo Camavinga.