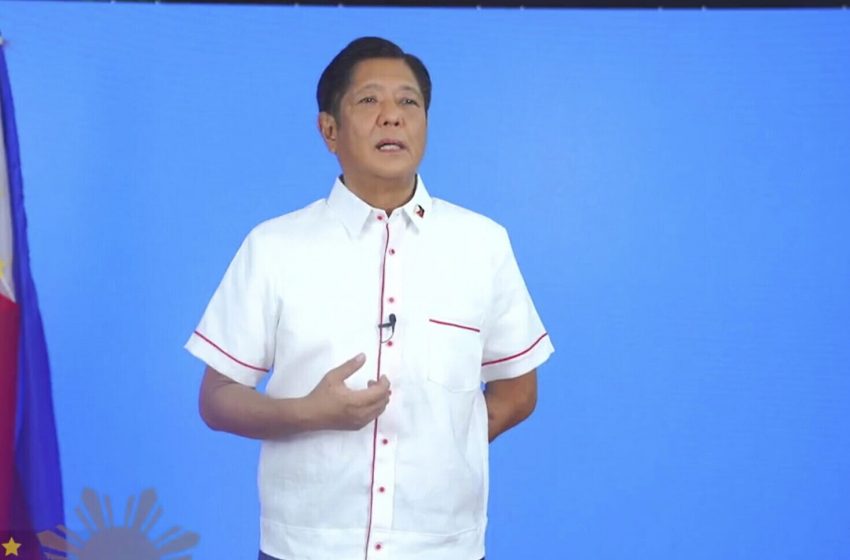 In this image from video posted on the Bongbong Marcos Facebook page, presidential candidate and former senator Ferdinand Marcos Jr. issues a statement to the media on Monday, May 9, 2022 in Manila, Philippines. The namesake son of late Philippine dictator Ferdinand Marcos appeared to have been elected Philippine president by a landslide in an astonishing reversal of the 1986 “People Power” pro-democracy revolt that booted his father into global infamy. (Bongbong Marcos Facebook page via AP)

Ferdinand Marcos Jr. appears poised to be the next president of the Philippines as millions began voting on Monday, under the watchful eyes of thousands of security forces after violence claimed four lives over the weekend.

If he wins, Marcos Jr. — son of former dictator Ferdinand Marcos Sr.— is expected to walk a tightrope between the U.S. and China.

“Eight out of 10 Filipinos would like us to be more assertive against China,” said Victor Manhit from BowerGroupAsia, who was citing a survey by Social Weather Stations, a private non-profit organization that tracks public opinion on political, social and economic issues in the Philippines.

There are at least 84% of Filipinos telling us that if we are a small country, maybe it’s time to build multilateral partnership and strength. And that’s why we saw during the campaign itself that Marcos slowly shifted. It’s possible that he heard this public clamor,” he told CNBC’s “Squawk Box Asia” on Monday.

Popularly known as Bongbong, Marcos has tried to recast his father’s legacy as comparable to former U.S. president John F. Kennedy’s family in its glamor. His father Ferdinand Marcos Sr. ruled with an iron fist for two decades until he was overthrown in 1986, and exiled to Hawaii where he died.

According opinion polls released last Monday, the 64-year-old namesake son of the deposed dictator will win more than half the votes to become the first presidential candidate to secure an absolute majority in decades.

The survey showed he polled at 56% — way ahead of his main rival incumbent Vice-President Leni Robredo who was at a distant 23%.

Robredo, a 57-year-old lawyer and economist, will need a low turnout or a late surge of support to score an upset.

Outgoing President Rodrigo Duterte, 77, is constitutionally barred from seeking a second term. He has not endorsed any candidate, but his daughter Sara is Bongbong Marcos’ running mate.