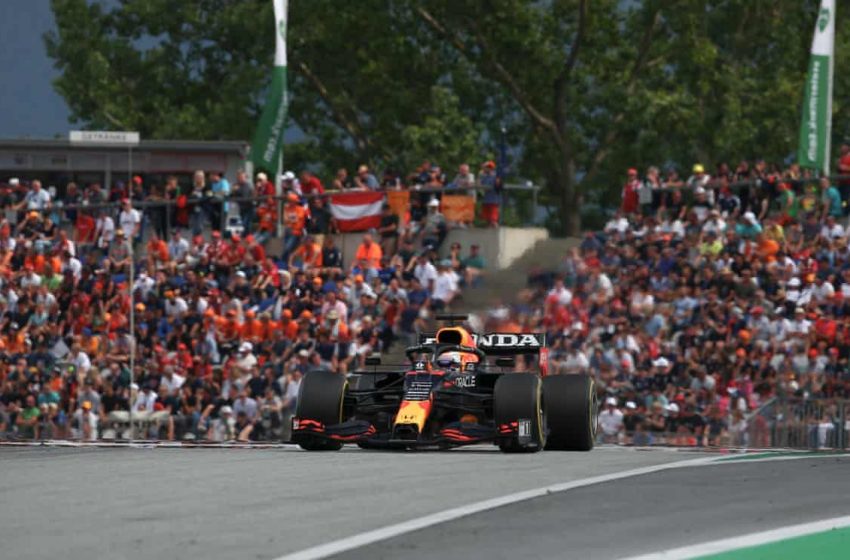 “Campione!” chanted the Dutch fans at the Red Bull Ring with wild abandon as Max Verstappen achieved a clinical, flawless victory at the Austrian Grand Prix. It may seem somewhat premature to conclude that the title race is in the Red Bull driver’s hands but, on this form and with his title rival Lewis Hamilton once more left floundering in fourth, they may well be enjoying one long party until the season finale in Abu Dhabi.

Hamilton acknowledged immediately just what a task lay ahead. “We are miles away from Red Bull,” he said. “We need all hands on deck.” A view that was echoed by his Mercedes team principal, Toto Wolff. “It is against the odds for us now that is clear,” he said. “They have an overall performance advantage and you could see that today.”

The race at the Red Bull Ring was the first since the pandemic began to be held open to a full capacity crowd and close to 60,000 had poured into the circuit. The vast majority were Dutch, with the glorious, natural amphitheater of the circuit nestling in the Styrian mountains swathed in orange-clad fans and wreathed in orange smoke as they set off flares. They had come to watch Verstappen for the first time in a seven-year career genuinely compete in a title fight and he duly delivered.

With a run from pole to flag that was unchallenged, Verstappen gave notice that he must now be considered favorite.

In contrast, Hamilton and Mercedes are staring down the barrel. Verstappen now has a 32-point lead over the world champion, and Red Bull has further extended their advantage over Mercedes to 44 points in the constructors’ championship.

Verstappen acknowledged his team and the fans. “It’s insane, I’m a bit amazed myself how today went,” he said. “I didn’t expect it to be like this. Incredible job by everyone to deliver something like this and so much orange is incredible, a great motivation.”

Hamilton may have been impeded here by damage to the floor of his car but second would still have been the best he could have hoped for. Verstappen finished 17 seconds in front of Hamilton’s Mercedes teammate Valtteri Bottas and 20sec in front of McLaren’s Lando Norris who took a superb third, his third podium of the season.

Mercedes have already acknowledged that they are putting almost all their resources into developing their 2022 car and in consequence Hamilton’s attempt to take the eighth title may be slipping away. Some upgrades are in development and he will be hopeful they can have some effect for the next round at Silverstone.

Here, however, Hamilton was only frustrated that what challenges they could put up was scuppered by the damage he took on lap 30 at turn 10, which the team believes was not through driver error but because of the load he was carrying through the turn.

“I already said before the race that it would be very hard to beat Max,” he said. “But obviously it’s frustrating to lose so much downforce on the rear of the car and not be able to hold on to the second place. So a lot of points lost today.”

Mercedes also clarified why they made the controversial decision to order the world champion, who had moved up from fourth to second, to let Bottas past with 19 laps remaining. They did so in order that the Finn would have the best chance of staying in front of a charging Norris, a move aimed at maximising constructors’ points over what might have been expected in making Bottas attempt to hold Norris back from Hamilton. However, Mercedes had evaluated Hamilton’s pace and worn rubber and calculated that any chance of second would have gone had they not let Bottas go.

Norris indeed did swiftly pass Hamilton but afterward, Bottas was able to hold on, suggesting the team had made the right call. Hamilton had to stop for fresh rubber but could make no further inroads, indicating just how badly compromised his car was.

Norris in contrast was delighted with perhaps his best performance of the season, having battled Hamilton fiercely in the opening laps for second place, with the 21-year-old staunchly defending such that the world champion paid tribute. “Such a great driver, Lando,” he said.

Norris’s willingness to scrap with Hamilton and indeed to be unintimidated by him was a testament to what an assured racer he has become in just three seasons in F1.

Wolff insisted that Mercedes have far from given up and Hamilton too maintained he was still enjoying the fight with Red Bull. “That’s what F1’s about, teams racing each other,” he said. “It’s a shame it’s not as close as it was at the beginning of the year but that’s the way it is, there’s still a lot of races ahead of us so we’ll keep our heads down and keep plugging away.”

The expected optimism then, yet Hamilton is now winless for five races and has not been more than 20 points off the title leader since the Austrian GP in 2017. As Verstappen’s fans began to weave their long way home from the heights of Styria, Hamilton and Mercedes have a mountain of their own to climb.

Ferrari’s Carlos Sainz was fifth, with Red Bull’s Sergio Pérez in sixth. Daniel Ricciardo was in seventh for McLaren with Charles Leclerc in eighth for Ferrari. AlphaTauri’s Pierre Gasly was in ninth and Fernando Alonso in 10th for Alpine.