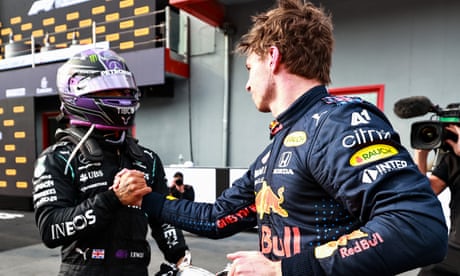 Elation, crushing disappointment and a mighty display of fighting spirit, the Emilia Romagna Grand Prix ran the very gamut of visceral sporting emotions. Such theatre, such drama was on show at Imola, the most human side of this technological arms race given glorious centre stage.

Max Verstappen’s win was a masterclass in execution in tricky conditions while Lewis Hamilton exhibited an exceptionally rare moment of his own weakness, only for the world champion to follow it up with a brilliant, relentless comeback to claim an unlikely second place.

As if Imola, this classic, magnificent circuit, had not delivered enough with the two rivals for the title now separated by just one point in Hamilton’s favour, there was a marvellous cameo too for McLaren’s Lando Norris. The young British driver threw himself around the fast-flowing track with wonderful abandon to return third place, equalling his best finish yet in what was perhaps the finest race of his career.

That the championship is likely to be a close-fought, nip-and-tuck affair this season could not have been better illustrated than by the contest between Verstappen and Hamilton. Nor equally could it have better demonstrated just how hard both these drivers will push to finish on top in what is looking set to be a titanic struggle.

The win was rightfully the Dutchman’s. Just as the regal peacocks roam free in the parkland of the Autodromo Internazionale Enzo e Dino Ferrari, Verstappen strutted the track in full magnificent pomp. Bursting from the line where he muscled Hamilton out of the lead in turn one, he followed with a definitive display of exquisite control in trying wet and dry conditions.