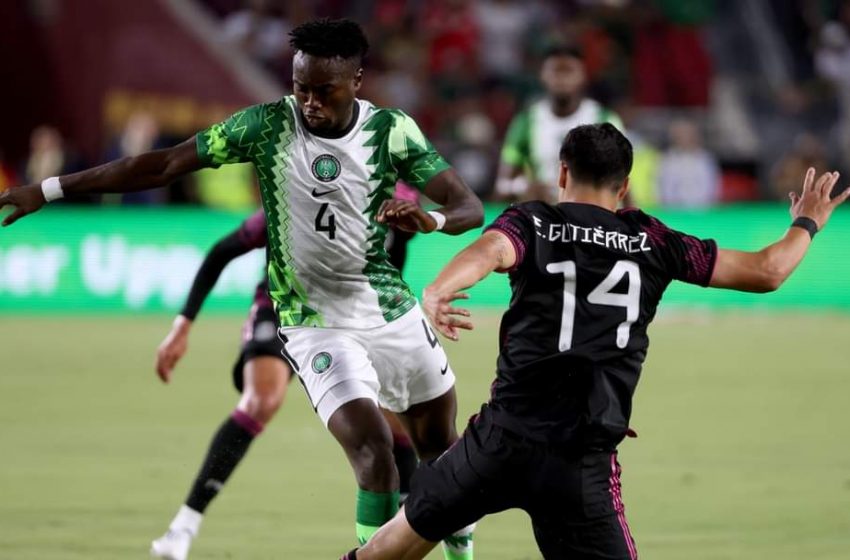 Mexico have defeated Nigeria 4-0 in their friendly match at the imposing Los Angeles Memorial Coliseum, simply known as LA Coliseum.

The Mexicans scored two goals in four minutes to record the lead in the game played at the 77,500- capacity LA Coliseum on Sunday (Nigerian time).

The match is one of the most-attended game globally since the restrictions that followed the coronavirus pandemic which broke out last year.

Hector Herrera put the Mexicans in front in the 2nd minute from the first cornerkick of the match while Rogelio Funes Mori made it 2-0 in the fourth minute, Udo kept him on-side as the referee awarded the goal despite calls for an offside by the Nigerians.

Luis Rodriguez was shown a yellow card in the 14th minute for a foul on Anayo Iwuala. He halted the Nigerian who was headed for a fast counter attack.

Jesus Corona almost made it 3-0 in the 25th minute but his volley from an accurate Hirving Lozano’s cross flew over the bar.

Lozano saw his shot saved by Nwabali in the 29th minute and went close once again in the 30th minute but his shot went wide this time.

The Eagles failed to get a shot on or off target in the first 45 minutes as the Mexicans controlled the tempo of the game.

Eagles defender, Imo Udo was booked in the 53d minute for a foul on Mexican forward Lozano after a dangerous tackle on the right flank but Nwabali make a smart save from the resulting free kick after skipper Herrera jumped the highest to head the ball.

Olusesi did well to stop Lozano’s cross at the start of the second half. The Napoli star called Nigeria’s goalkeeper into a smart save after blasting a shot from 22 yards. Nwabali was also up to the task to save the a close range header from the resulting corner kick.

Nwabali was beaten the third time by Mexican skipper Herrera. The Atletico Madrid midfielder scored his brace after benefiting from a lose ball from Nwabali’s save from a Lozano attempt on goal.

Stephen Jude and Sunday Adetunji came on for Seth Mayi and Charles Atshimene in the 58 minute of the encounter.

Jonathan dos Santos made it 4-0 in the 78th minute scoring from Erick Gutierrez well calculated pass from the midfield.

The Sunday match was the sixth confrontation between the senior teams of both countries, four of which have ended in draws.

The only win in the series has gone to Mexico with a US Gold Cup encounter in Dallas (State of Texas) 2-1 on 24th June 1995.

Close-fought confrontations include a 1-1 draw at the FIFA Intercontinental Tournament for the King Fahd Cup (now FIFA Confederations Cup) in Saudi Arabia on 13th January 1995 (Mexico prevailed 5-4 on penalties in the quarter-final match), and 0-0 draws in friendly matches in Houston and Atlanta the previous decade. A friendly game in Mexico also ended 2-2