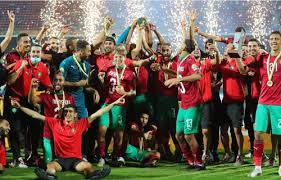 Morocco became the first back-to-back winners of the African Nations Championship (CHAN) when they scored twice after corners to defeat Mali 2-0 in the final in Yaounde Sunday.
Soufiane Bouftini broke the deadlock on 69 minutes and captain Ayoub el Kaabi doubled the lead 10 minutes later to create history after Morocco hosted and won the previous edition three years ago.
It was the second CHAN final loss for Mali, after 2016, and they are still seeking a first Confederation of African Football (CAF) senior national team success.
Morocco won five of six matches at a tournament reserved for home-based players, scored 15 goals and conceded three.
The north Africans went into the title decider as favourites having scored 12 goals against Uganda, Zambia and hosts Cameroon in their previous three matches.
Mali had managed just one goal in their last three outings, eliminating Congo Brazzaville and Guinea in penalty shootouts after goalless quarter-final and semi-final stalemates.
Moroccan Soufiane Rahimi began the final as the leading scorer with five goals and Malian Issaka Samake was yellow carded after only six minutes for hacking down the Golden Boot chart-topper.
When Rahimi was fouled a third time, just outside the box, Morocco nearly went ahead from the resultant free-kick, which goalkeeper Djigui Diarra parried and the loose ball was hastily cleared.
Moussa Kone fluffed a great chance to put Mali in front midway through the opening half when one-on-one with goalkeeper Anas Zniti, one of two survivors from the 2018 winning team.
Zniti blocked a shot with his right foot and then grasped the ball to the relief of his defenders, who had been caught cold by a quick lofted pass.
Kone came close again when his header flew narrowly wide at the 40,0000-capacity Stade Ahmadou Ahidjo, where the crowd was restricted to 10,000 because of the coronavirus pandemic.
The first half ended 0-0 and Mali coach Nouhoum Diane would have been happier than Moroccan counterpart Houcine Ammouta as the west Africans had largely nullified the threat of Rahimi.
A long VAR delay 10 minutes into the second half ended with Moroccan appeals for a penalty being denied and almost immediately Malian Sadio Kanoute nodded just wide following a free-kick.
Kone had another chance to break the deadlock midway through the second half but fired straight at Zniti.
In a tight, physical clash it took a defender to break the deadlock with Bouftini putting Morocco in front by heading a corner wide of Diarra.
El Kaabi put the issue beyond doubt with a brave close-range header and Mali were reduced to 10 men in stoppage time when Samake was sent off after a second yellow card.