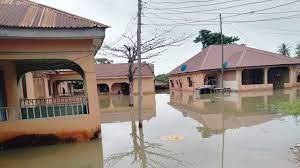 Following renewed fears of residents about the ravages of massive flooding nationwide, Lagos State convened a meeting of all critical stakeholders to evaluate the state’s preparedness for any eventuality, with a resolution that while Lagos is not totally immune to flooding, the state will continue to effectively manage its situation.

Addressing the meeting held at Alausa Secretariat over the weekend, which was convened on the directives of Mr. Governor, Commissioner for the Environment and Water Resources, Tunji Bello said now is the time for all enforcement arms of the state to step up their supervisory roles.

He stated that the enforcement impact must be felt by recalcitrant people and institutions who have defied the government and built structures on drainage alignments, flood plains and low-lying areas now more than ever before.

He added that despite the fact that Lagos is a coastal city with almost one-third of its total landmass underwater, what it experiences after each bout of heavy rainfalls is flash flooding which will recede a few hours after the cessation of such rainfalls.

Tunji Bello, while sympathising with all those who suffered one form of loss or another nationwide due to flooding, said Lagos is constantly monitoring the Ogun River which flows directly into the Lagos Lagoon.

He said the Seasonal Rainfall Pattern for 2022 released earlier in the year by the Nigerian Meteorological Services NIMET had predicted that the peak of the resurgent rainfall for the year will be in October.

The Commissioner said Lagos may be susceptible to the dangers of flooding with the periodic release of rainwater from Oyan Dam by the managers, the Ogun Oshun River Basin Development Authority to maintain the sanctity of the dam and which may increase the level of water of the Lagoon.

He noted that as a result of this development, residents of all identified areas like Ketu, Alapere, Agric, Owode Onirin, Ajegunle, Alagbole, Kara, Isheri Olowora, Araromi Otun Orisha Community, Agiliti, Maidan, Mile 12, Odo Ogun, Owode Elede, Agboyi I, Agboyi II, Agboyi III which are banks to the Ogun River are again being alerted to be ready and alert to relocate at any given time.

The Commissioner informed that what many fail to realise is that the position and location of Lagos State on the map makes the Lagos Lagoon the convergence point of all water from the Ogun River, Ona Ibu River, Osun River, Sasha River that runs across the many South West States.

He explained that the State is also working with the Ogun Oshun River Basin Development Authority to ensure that rainwater releases that pass through the Oyan dam have a minimal negative impact on the residents.

Bello reiterated that the State, through the Office of Drainage Services and Water Resources, is embarking on massive dredging and cleaning of all primary and secondary collectors across the state.

“This is in addition to the construction of new channels as well as deployment of the quick response Emergency Flood Abatement Gang to free up manholes and blackspots in an effort to ensure that the drains perform at optimum capacity to be able to contain runoffs”, he said.

Also speaking, the Permanent Secretary, Office of Drainage Services and Water Resources, Engr. Nurudeen Shodeinde assured residents that the State Government is upping the ante in terms of its preparedness on a 24/7 basis.

He gave kudos to the State Governor for always providing the financial wherewithal to the Ministry which has enabled it to actualise many of its plans and programme to ensure a flood-free Lagos.

Shodeindee also said other residents living along major drainage channels of System I to 169 around the state must also be wary of the effects of flash flooding.

He recalled that a few days ago, areas like Oko Oba, Abattoir and Aboru in Alimosho were flooded after a two-hour rainfall which had an intensity that had not been witnessed in the last 30 years due to climate change.

The Permanent Secretary stressed that such one-off rainfall of unprecedented intensity should be expected during this period and should be prepared for.