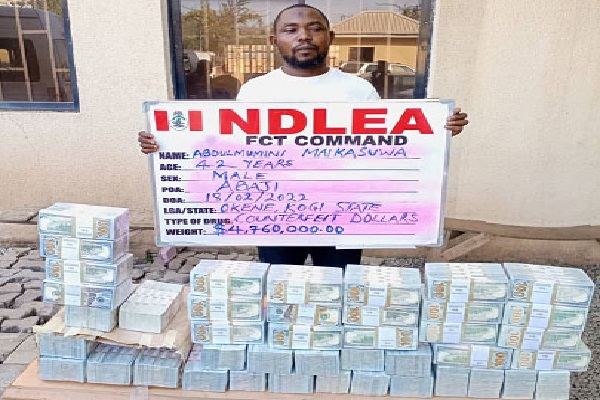 Officials of the National Drug Law Enforcement Agency (NDLEA) have seized $4.7 million counterfeit cash which was to be injected into Nigeria’s economy.

It was a consignment sent from Lagos to the FCT and a 52-year old man was arrested in relation to the counterfeit cash.

Babafemi said, “A controlled delivery of the parceled counterfeit US dollars totalling $4, 760, 000 led to the arrest of a principal suspect, 52-year-old Abdulmumini Maikasuwa.

“The seizure followed intelligence received by the FCT Command of the Agency detailing the movement of the cash and the vehicle conveying it. Meanwhile, Chairman/Chief Executive of NDLEA, Brig. Gen. Mohamed Buba Marwa (Retd) has directed that both the cash and the suspect in custody be transferred to the Economic and Financial Crimes Commission (EFCC) for further investigation.”

The agency’s spokesman also said that in Kwara State, barely three weeks after a nursing mother, Mrs. Rashidat Adebayo, 38, was granted administrative bail following her arrest for dealing in illicit drugs, operatives have again arrested her in Offa with assorted drugs such as Tramadol, Swinol, Diazepam and Pentazocine injection ampules.

“Before her latest arrest on Thursday 17th February, the nursing mother had been arrested and granted bail on 24th January 2022 for dealing in similar drugs,” Babafemi said.

A total of 164.8kg of cannabis sativa concealed in milk cartons was recovered from the truck.

In Ebonyi, gunmen attacked an NDLEA team, killing an official and setting their van ablaze.

The incident happened yesterday in the Ezzamgbo area of the Enugu-Abakaliki Expressway.

Another operative was seriously injury, a source said, adding that the attack happened near a military checkpoint.

The gunmen also took away a rifle belonging to one of the officials.

Spokesperson of NDLEA in Ebonyi State, Mr. Audu Benji said he was in a meeting and would get back to our reporter after the meeting.

He was yet to do so hours after the meeting.

He also refused to take subsequent calls or reply messages sent to him.

Police spokesperson, Loveth Odah could not be reached as her did not take calls placed The suspect and to her by our reporter.