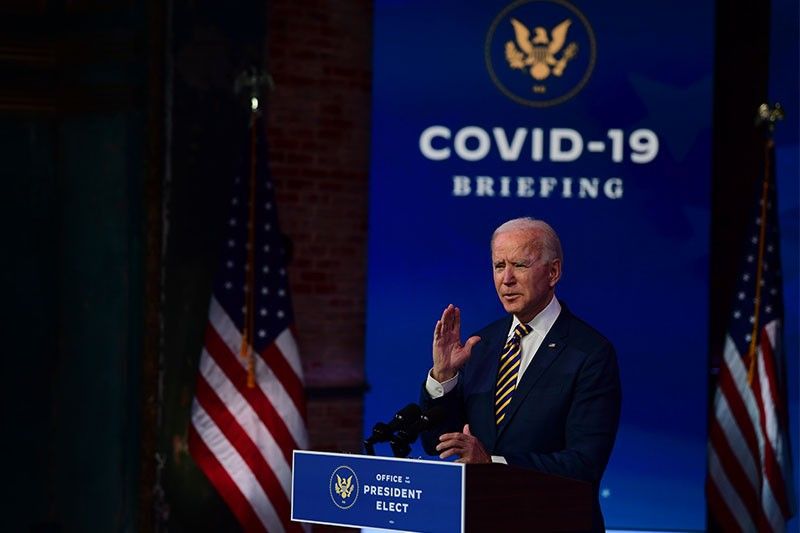 The new variant of coronavirus was detected for the first time Tuesday in the United States and Latin America as President-elect Joe Biden vowed to significantly ramp up the vaccination drive.

The new strain, which first emerged in the UK, pushed Britain to a new daily record of infections and led South Africa to impose a raft of new measures, amid fears around the world that holiday revelers are aggravating the spike in infections.

The EU health agency warned the strain carried a high risk for more hospitalizations and deaths — not because the infections are more severe but because it spreads more easily.

The Rocky Mountain state of Colorado recorded what is believed to be the first case in the United States — which has suffered the highest death toll of the year-old pandemic that has claimed more than 1.78 million lives globally. Nearly 338,000 people have died of Covid-19 in the US.

Governor Jared Polis said a man in his 20s near Denver was infected with the variant known as B.1.1.7 and is isolating.

Biden, after a briefing from experts, warned that the dire Covid situation may not ease up until “well into March.”

“The next few weeks and months are going to be very tough — a very tough period for our nation, maybe the toughest during this entire pandemic,” he said.

Hospitalizations are back at an all-time high in the US at more than 121,000 as of Monday.

In Los Angeles, ambulances waited all day to unload Covid patients, with more than 95 percent of hospitals forced to divert new cases away, and one reportedly treating patients in its gift shop and chapel. Southern California extended a three-week-old lockdown indefinitely Tuesday.

“The Trump administration’s plan to distribute vaccines is falling far behind,” Biden said, promising: “I’m going to move Heaven and Earth to get us going in the right direction.”

The Trump administration had predicted that 20 million Americans would be vaccinated by the end of December.

With days left, some 2.1 million have received the first shot of the vaccine, according to the Centers for Disease Control and Prevention.

Biden renewed his promise to administer 100 million vaccine doses in his first 100 days in office and confirmed he would invoke a Korean War-era law to force private industry to step up production.

With health workers desperately waiting, politicians have been among the first to be vaccinated in a stated goal of setting an example, with Vice President-elect Kamala Harris taking her first dose Tuesday before cameras in Washington.

As conspiracy theories spread on the internet, a new poll by Ipsos Global Advisor showed that just four in 10 people in France want to get vaccinated, a figure that is only slightly higher in Russia and South Africa.

Record cases in Britain
Britain’s government came under pressure to tighten restrictions as it announced a record 24-hour high of 53,135 new infections.

“We are incredibly thin on the ground. NHS (National Health Service) staff have not been prioritized for the vaccine and are going off sick in droves with the new strain,” she tweeted.

In South Africa, which has recorded more than 300 cases of the new variant and is the first African nation to hit one million cases, the government banned the sale of alcohol and made masks compulsory in public.

“We have let down our guard, and unfortunately we are now paying the price,” said President Cyril Ramaphosa.

Chile on Tuesday became the first Latin American country to detect the new strain, in a woman who returned from Madrid after also visiting Britain and Dubai.

In response, health authorities announced a 10-day quarantine from December 31 for all arrivals.

The new strain was also detected in the United Arab Emirates and India, which has the second-biggest caseload in the world.

Worrisome trends have been increasing worldwide, with South Korea — hailed for its early success — logging its highest daily death toll yet.

And Moscow reported a 27 percent increase in fatalities in the capital from October to November — a day after Russia admitted its number of Covid-19 deaths were more than three times higher than previously reported.