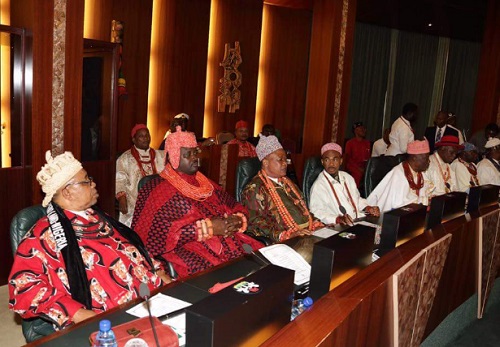 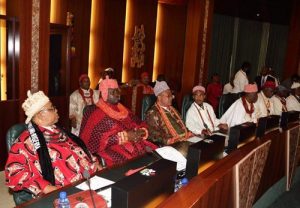 • Want Relocation Of Firms’ Offices To Region
• Enforcement Of Gas Flaring Deadline, Action On Maritime Varsity
• Reduction Of Military Presence
• Creation Of Industrial Corridor
President Muhammadu Buhari and some prominent leaders and stakeholders in the Niger Delta yesterday began to find lasting solutions to the crises in the oil-rich region.
As part of the move, President Buhari hosted the leaders at the Presidential Villa where they demanded that they be considered in the allocation and ownership of oil wells. The Niger Delta leaders specifically outlined a 16-point agenda which they presented to Buhari towards halting militancy in their area.
Among those present at the meeting were traditional rulers, other prominent elders, service chiefs and ministers appointed from the region.

Addressing State House Correspondents after the meeting, former Military Administrator of old Rivers State, King Diete-Spiff, the Amanayabo of Twon-Brass said: “We want the Federal Government to enunciate policies and actions that will address the lack of participation as well as imbalance in the ownership of oil and gas assets.”
Joined at the briefing by the Minister of State for Petroleum Resources, Dr. Ibe Kachukwu, Governor Ifeanyi Okowa of Delta State and former Minister of Information and elder statesman Chief Edwin Clark, Diete-Spiff said other demands contained in the document presented to President Buhari were the need for the enforcement of the zero gas flaring deadline, approval for the takeoff of the maritime university in Delta State and award of pipeline surveillance contracts to the communities.
The leaders also demanded the immediate relocation of the administrative and operational headquarters of the International Oil Companies (IOCs) to the Niger Delta.Other demands include the resolution of a number of pending laws and justice issues regarding some aggrieved groups and individuals, restructuring and funding of the Niger Delta Development Commission (NDDC) and the Ministry of Niger Delta Affairs to ensure they refocus as true interventionist organisations as well as the implementation of a comprehensive resettlement plan to reduce the risk of making the region a stateless people. The Niger Delta leaders said government must improve power supply in the region hence the need for a power plan.
On economic development and empowerment, they want the Brass Liquified Natural Gas (LNG) and the fertiliser plant project, including the Train 7 reviewed with a view to updating the national gas master plan to integrate the economic interests and industrialisation of the region.
According to Diete-Spiff, leaders also want the Federal Government to create a Niger Delta industrial corridor that would process some portions of the hydrocarbon natural resources, expediting work on the export processing zones and harnessing the huge rain-fed agricultural potential of the area through the development of farm estates, fishery development projects and agro-allied industrial clusters.
Also critical in the 16-point demand is the need to reduce military occupation of communities in the region which, according to the leaders, was responsible for the frequent agitation among the youths.
According to Kachikwu, President Buhari assured that his government would study carefully all demands in the document presented by the Niger Delter leaders so as to aid the administration in taking the right steps.

Clark who led the delegation jointly with Diette-Spiff said that all the splinter groups in the region had collapsed into what is now known as the Pan-Niger Delta Forum under his leadership and that of King Diette-Spiff.
The Vice President, Prof. Yemi Osibanjo, the Chief of Staff, Abba Kyari and the Secretary to the Government of the Federation, Babachir David Lawal accompanied the President to the meeting.
The Ministers of Justice, Defence, Petroleum (State), Transportation, Niger Delta, Education (State), the Chief of Defence Staff, the National Security Adviser, the Director-General, Department of State Services, the Chief of Army Staff, Chief of Naval Staff, the representative of the Chief of Air Staff and the Inspector-General of Police were also in attendance.