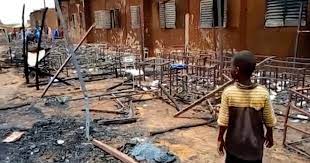 People in Niger are mourning 20 pre-school children – aged between three and five – trapped in the flames of a horrific fire at a school on the outskirts of the country’s capital, Niamey.

The young victims perished on Tuesday when the blaze tore through buildings made of wood and straw in the impoverished poor “Pays-Bas” neighbourhood that was built in a former clay quarry near Niamey airport.

On Wednesday, anguished parents and teachers gathered at the school. Wiping away tears with her veil, the school’s director Habiba Gaya said all of Niger was in “total mourning”.

“The little children, innocents, were really burned alive in this fire,” she told AFP news agency, explaining that while older children were able to make it out, those aged five and under were not.

“They were little so they weren’t able to run.”

The inferno spread so quickly that one mourning father, who identified himself only by his first name, Abdoulaye, said it had already destroyed the classrooms by the time firefighters arrived at the scene.

Rescuers set off rapidly and the fire was put out… but the intensity of the fire was enormous,” fire service commander Sidi Mohamed said on public television on Tuesday.

Only the remains of desks and corrugated metal sheets were still visible among the debris, with charred books, pencil cases and backpacks scattered among the ashes.

“The flames were carried from classroom to classroom by the wind,” said Balaraba Ibrahim who lives nearby.

Her five-year-old niece Yasmina was among the victims.

“She had come home and then she went back to school. It’s almost as if she was answering the call of death,” Ibrahim said, breaking down.