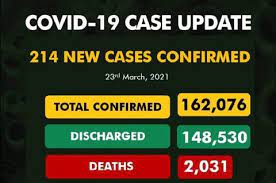 Exactly one year after Nigeria reported its first COVID-19 fatality, one person died from the disease on Tuesday. Prior to Tuesday, no death was recorded from the virus in two days making Tuesday’s fatality the first in 72 hours.

Also, about 214 people tested positive for COVID-19 in Nigeria on Tuesday.

The total number of infections in the country are now 162,076 while 2,031 deaths have occurred.

This is according to an update published by the Nigeria Centre for Disease Control (NCDC) Tuesday night.

In the past week, there has been a marginal decline in new cases as daily infections have fallen below 300.

The NCDC data also suggests that Africa’s most populous nation may have gone past its worst phase of the virus although experts warn it might be too early to celebrate.

For the first time this month, Adamawa had the highest figure with 109 new cases on Tuesday; followed by Lagos, the most impacted city in Nigeria, with 33 new cases.

Since the pandemic broke out in Nigeria in February last year, the country has carried out over 1.7 million tests.