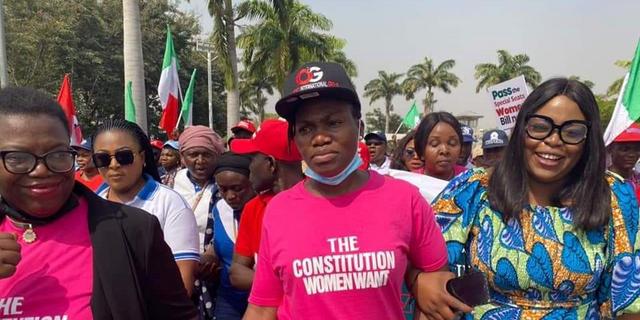 Scores of Nigerian women protested Wednesday at the National Assembly against the rejection of several bills seeking gender equality in the country.

They trooped out in hundreds and asked the lawmakers to revisit the gender bills, accusing the lawmakers of choosing to deny women the opportunity of inclusion and representation in governance by voting against the bills.

Of the 68 legislations, about five bills sought to promote more opportunities for women in political parties, governance and the society at large. All five bills were rejected.

Another bill sought to allocate 35 per cent of political positions based on appointment to women. Another legislation sought to create special seats for women in National and State Assemblies.

The women, led by many civil society groups, carried placards to express their grievances. They said the National Assembly has clearly said it does not want progress in the country. The women were addressed by the Minority Leader of the Senate, Eyinnaya Abaribe, who said he supported the bills but was outvoted.

“I will pass your message on to the Senate President and I will urge him to come and respond to you personally.

“The record of the voting is a public document. It is your right to ask for it from the Senate President and the Speaker and publish it so that everybody will know,” he said.

A few principal officers, Ajayi Borroffice and Sabi Abdullah, also appeared on behalf of the Senate to address the protesters but they insisted that they would only speak to the Senate President and the Speaker of the House of Representatives.

Plateau senator, Nora Daduut, also attempted to address the women but she was shut down by the protesters.