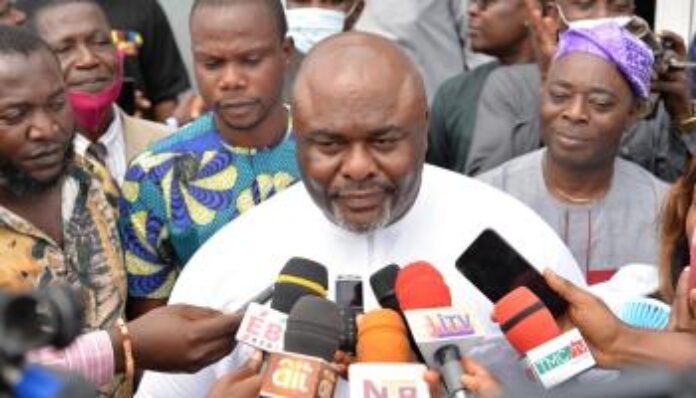 The Nigerian Community in Italy have advised Mr Osaze Ero, a former Commissioner in Edo to halt his proposed protest against the Italian Government and seek judicial interventions to resolve his complaints.

The Nigerian Community through the leadership of its several Associations in Italy made the call during a Press Conference on Thursday in Rome.

According to the group, seeking judicial interventions was a better diplomatic way of resolving disputes, rather than engaging in a protest which could sabotage the good bilateral relations between Nigeria and Italy.

The News Agency of Nigeria (NAN) reports that Ero, a former Commissioner for Arts and Diaspora in Edo accused the Italian authority of wrongful detention in 2019 when he traveled to Germany.

Ero had planned to orgainse protests against the Italian Authority for allegedly trying him under a corrupt judiciary system and the illegal detention of Nigerians in Italian Prisons.

Mr Omorondion Iduhun, Chairman, Nigerians in Diaspora Organisation (NIDO), Italy called on Ero to work with the Nigerian Embassy in Italy in order to amicable resolve his complaints against the Italian authority.

Iduhun disclosed that it was through the earlier interventions from the Nigerian Mission that Ero was released after being detained by the Italian Authority, adding that the Embassy is always ready to resolve issues concerning Nigerians in Italy.

“I spoke to Commissioner Ero and he told me he came to Italy for a meeting, which we do not know about and that the people he had the meeting with were the ones that accused him.

“Because it is not possible that the Italian police will pick you if you have not done anything.

“We can also see some vital points in his own complain, but that is not the way to go about it. I feel he should call his team of lawyers that were able to exonerate him from that charges.

“But for that protest, we are not in support of it and we call on our people in Rome and Nigeria not to join in any protest because it is not of our good image. Everybody should deist from that.

“I have also told our former commissioner that he should also desist from that and give us the responsibility to take the issue from here.

“We are also appealing to our brother to sheath his sword and see what we can do”, Iduhun said.

Also speaking, Mr Chima Ibezim, President of the Nigerian Association, Roma Lazio Province and Vatican said the Italian government have been very hospitable to Nigerians, hence the community will not engage in any act to sabotage such relationship.

“We would not want people to mix up issues.

“The Embassy itself has been working to see that our people are justly treated and promised to go round Italian Prisons, so we will want him to collaborate with the Embassy.

“We plead to dissociate with protest and if there is any form of injustice, the authority is poised to helping us address the situation”, Ibezim said.

Pastor Mike Oputteh, Welfare Officer, National Union of Nigerians in Italy (NUNAI) also reiterated the need for Ero to seek judicial redress in other for both countries to continue enjoying its good relations.

Oputteh said Nigerians are not targeted in Italy, adding that Italy is one country is Europe that has ade itself home to Nigerians with the best migration, and asylum seeking policies.

“Nigerians are not being targeted. The Italian government accommodate us very well and we do  not want to lose that.

“Ero was released based on the fact that there was not enough evidence against him, yet he condemned the Italian Judicial System. It is best he seeks redress through his lawyer or the Embassy”, Oputteh said. (NAN)