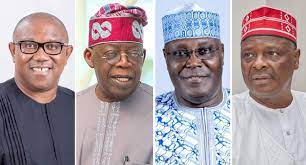 The Northern Elders Forum (NEF) has called on Nigerians to question presidential candidates on how they intend to tackle the country’s challenges if elected.

This is according to the spokesman of NEF Baba Hakeem-Ahmed who featured as a guest on Channels Television’s Sunday Politics.

“Nigerians need to press our candidates. We desperately need to find out who among these people should be trusted,” he said during the show.

While the major contenders including Peter Obi of the Labour Party (LP), Atiku Abubakar of the Peoples Democratic Party (PDP); Bola Tinubu of the All Progressives Congress (APC), and Rabiu Kwankwaso of the New Nigeria Peoples Party (NNPP) are vastly experienced, he said they should show Nigerians a roadmap to combat the country’s major issues.

“These are all hugely-experienced people in terms of managing people. These are also people with enough money to get to at least a point where they are now candidates. Their personalities should be scrutinised,” the NEF spokesman maintained.

He said the recent town hall meeting the group organised was to give the candidates a platform to tell the northern region and Nigerians what they have in store if elected in the 2023 poll.

This kind of conversation, he said, should be emulated by other regions so that Nigerians will be well-equipped to make the right choices come next year.

“If it can be replicated in other ways, it should be done. You need to press these candidates to be more specific in what they want to do,” he said, maintaining that the contenders should be “challenged”.

The NEF, he said, will go through the manifestoes of the contenders to give the body greater insight into their capacities.

With Nigeria’s economy flagging, oil production at historic lows, and insecurity a major issue, the next president faces a host of urgent problems. The candidates have four months to sell themselves to the nation. A total of 18 presidential hopefuls are running, including one woman.