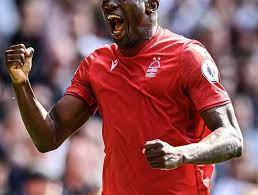 Awoniyi scored against West Ham United at 45+2 minutes, just at the stroke of half-time.

The Hammers had a first-half goal which was ruled out after the intervention of the Virtual Assistant Referee. Other attempts by West Ham at goal were also not successful.

Dean Henderson, who is one of Forest’s 14 new signings, was the second hero alongside Awoniyi as he (Henderson) saved West Ham’s Declan Rice’s penalty.

Both heroes made their home debuts in the match.

Sunday’s match was West Ham’s second opening game of the season, and the Hammers have now lost both opening games. They lost 2-0 to Manchester City last weekend.