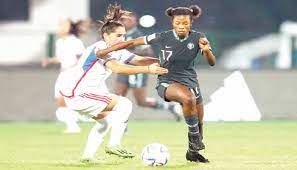 Flamingos defender Miracle Usani, while recalling her experience during the quarter-final shootout against USA at the ongoing U-17 Women’s World Cup in India, says the Nigerian team can overcome any side at the tournament, after their victory against the Americans on Friday.

Nigeria beat tournament favourites USA 4-3 on penalties after full-time ended 1-1 with Usani converting one of the Flamingos’ spot kicks, but not without some drama.

Usani fell on the pitch in tears after she saw her penalty saved by Valentina Amaral, but she got a second chance after VAR adjudged Amaral to have stepped off her line before making the save, which meant Usani had to a second chance to retake the penalty.

Much to her relief and that of millions of Nigerians back home, Usani converted from the spot as Nigeria advanced to the semi-finals of the competition for the first time since inception in 2008.

“The game led me up to that moment. It ended up going to penalties and I needed to step up and take responsibility,” Usani told FIFA.com.

It was just about winning the game. That’s exactly what we had to do, and that was the key to our victory.

“I was so relieved after the game. I feel much better now, I’m so happy that I was given a second chance. I really wanted to score the second, so I’m happy.”

The defender, a dead-ball specialist, added that Flamingos could defeat any team after eliminating the Americans.

“I believe we can get to the final,” she said. “If we can beat the USA, I don’t see any obstacle standing in our way.”

Flamingos will tackle Colombia in the semi-final of the U-17 Women’s World Cup in Goa, India on Wednesday.