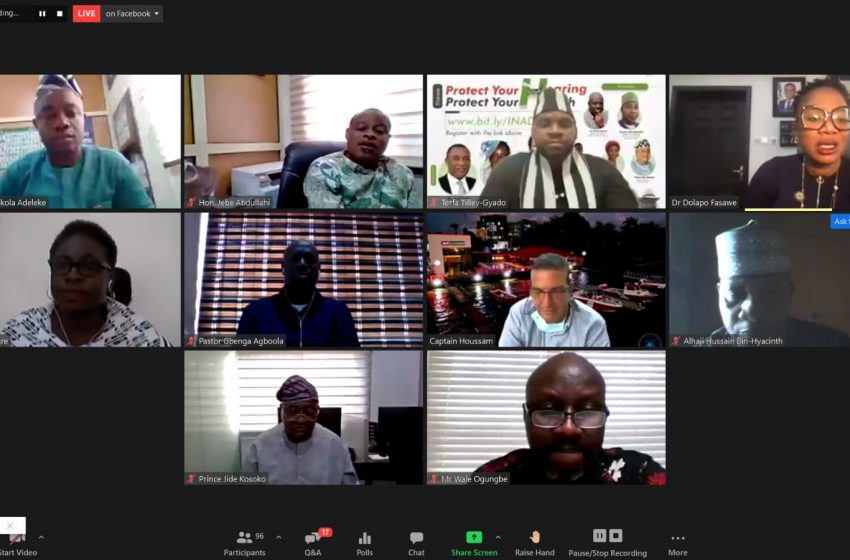 The Lagos State Environmental Protection Agency (LASEPA) has reiterated its determination at ensuring a noiseless environment through the implementation of the relevant laws of the Agency against noise polluters, charging concerned sectors to critically appraise their activities and develop noise management strategies.

The General Manager, Dr. Dolapo Fasawe, gave the advice during the webinar session held on Wednesday to mark the Year 2021 International Noise Awareness Day (INAD). The event was themed, “Protect Your Hearing, Protect Your Health”.

According to her, the webinar was also organised with the intent of addressing the negative impact of noise on hearing, health and quality of life of citizens, while promoting a peaceful environment in tandem with the T.H.E.M.E.S development agenda of the State government.

“All over the world, the last Wednesday of April is celebrated annually as the International Noise Awareness Day to sensitise the public on the importance of noise pollution control, its implication on human health and to serve as a call for action and collaboration between regulators and stakeholders against the menace and to promote a healthy culture for a serene environment that is synonymous with a smart city like Lagos”, she said.

Fasawe maintained that it is understandable that noise is an essential component of urban development that cannot be eliminated but can be controlled to an acceptable level.

She stated that the government is disposed to the fundamental rights of individuals to the religion of choice, right to fellowship, entrepreneur drives but with total consideration and respect for the right of others to a reasonably quiet environment and peaceful living, stressing that all activities that tend to promote disunity, disaffection and chaos amongst residents must be shunned.

The General Manager also attributed the high rate of noise pollution in Lagos to the upsurge of illegal buildings and indiscriminate conversion of residential property to religious/leisure use, adding that the new urban development plan for the State is embedded with practical and recommended strategies to keep noise pollution within an acceptable level and protect innocent citizens from dangers inherent in constant exposure to noise pollution.

To achieve the necessary result, she revealed that the Agency has increased its advocacy to encourage self-regulation and voluntary compliance, while failures to abide shall be met with strict consequences.

She said policies and regulations to be implemented include restriction on the use of noisy generators, indiscriminate use of sirens, non-use of vehicle horns in certain places and restriction of loudspeakers in public places as part of measures to reduce noise in the State.

Fasawe reiterated that LASEPA would ensure that new entertainment and religious facilities are soundproofed before granting approvals, Environmental Impact Assessment (EIA) would be conducted on existing buildings to ensure structural capability while failure to abide by the set standards will attract strict consequences.

While declaring the summit open, the Permanent Secretary, Office of the Environmental Services, Mrs. Belinda Aderonke Odeneye, commended LASEPA for not resting on its oars to bequeath a friendly and conducive environment devoid of environmental hazards to residents.

She, therefore, called for the cooperation and support of all citizens in the fight against noise pollution, declaring that government cannot do it alone.

The panelists, who were drawn from various interest sectors such as religion, entertainment, industrial and hospitality, unanimously agreed that their practices should be guided by the doctrine of good neighbourliness with due consideration for the host community.

They also expressed their readiness to support the government in achieving its objective by complying with laid down rules and regulations of the State.