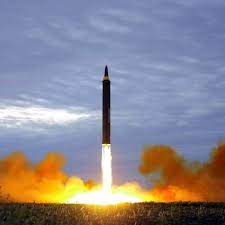 North Korea’s state media has hit out at the recent termination of an agreement between the United States and South Korea that capped the development of South Korea’s ballistic missiles, calling it a sign of Washington’s “shameful double-dealing.”

South Korean President Moon Jae-in announced the abolition of the joint missile guidelines that had limited the range of ballistic missiles developed by the South to 800 kilometres (500 miles) after his first summit with US President Joe Biden earlier this month.

North Korea’s official KCNA news agency on Monday carried an article by Kim Myong Chol, who it described as an “international affairs critic,” to accuse the US of applying a double standard as it sought to ban Pyongyang from developing ballistic missiles.

The US is “engrossed in confrontation despite its lip-service to dialogue,” Kim said. “The termination step is a stark reminder of the US hostile policy toward the DPRK and its shameful double-dealing.”

North Korea’s target is the US, not South Korea’s military, and it will counter the US on “the principle of strength for strength,” Kim said.

The comments are North Korea’s first in response to the May 21 summit between the leaders of the US and South Korea. Pyongyang has said previously it will not return to talks as long as there is US “hostility”.

The previous range limits – enough for a South Korean weapon to strike all of North Korea – arose out of concerns about a regional arms race.

“South Korean progressives often express a willingness to cancel defense exercises with the United States in order to focus on diplomatically engaging North Korea. But Seoul’s discontinuation of guidelines that had limited its missile capabilities may be a greater source of friction in pursuing peace with Pyongyang,” Leif-Eric Easley, associate professor of international studies at Ewha Womans University in Seoul, said in an email.

“From Pyongyang’s perspective, this looks like an expensive arms race. The Kim regime will continue to complain about South Korean ‘hypocrisy’ and U.S. ‘hostility’ while advancing its own missile programs.”

Kim, the KCNA commentator, accused the US of trying to “spark off (an) arms race on the Korean peninsula and in its surrounding areas and check the development of (North Korea),” as he called Moon “disgusting, indecent” for welcoming the termination of the guidelines.

The Biden administration is shaping a new approach on North Korea amid long-stalled talks over the North’s nuclear programme.

During their summit, Biden and Moon said the US review “takes a calibrated and practical approach that is open to and will explore diplomacy” with North Korea.

The North Korean statement criticised the Biden administration’s review indirectly, saying the new policy was viewed by other countries “as just trickery”.