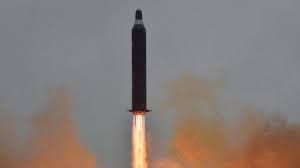 An attempted North Korean missile launch ended in apparent failure Wednesday, according to South Korea’s military. It comes after days of close monitoring by Seoul and Washington, in anticipation of a possible intercontinental ballistic missile test, which Pyongyang has not conducted since 2017.

The South’s Joint Chiefs of Staff say the projectile was launched from Pyongyang’s Sunan district. The Sunan airfield was the site of test-launches on Feb. 27 and Mar. 5, which Pyongyang claims were tests of components for a military reconnaissance satellite.

Neither Pyongyang nor Seoul has confirmed whether or not Wednesday’s launch involved the same kind of projectile as the March and February launches. The U.S. and South Korea say that those launches were actually cover for ICBM tests.

The Yonhap News Agency quotes anonymous sources as saying the missile appears to have exploded in midair at an altitude of less than 12.4 miles.

Wednesday’s attempted launch is the first since the election in South Korea of conservative opposition party candidate Yoon Suk Yeol on Mar. 9. Before that, Pyongyang had conducted nine tests so far this year, the most since Kim Jong Un came to power in North Korea in 2011.