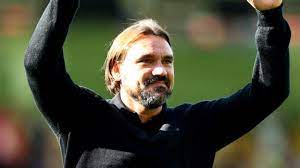 The new deal will keep the German at the club until the end of the 2024-25 season.

Farke arrived at Carrow Road in 2017 from Borussia Dortmund and led Norwich to the top flight in 2019, before relegation in 2020 and subsequent bounce back.

“It is a pleasure to be allowed to continue to work on this level with such a special club,” he told the www.canaries.co.uk website.

“Now it’s about going the next step, doing everything we can to make sure this club becomes an established Premier League side.”

Norwich secured promotion as winners of the second-tier Championship last season and start the campaign at home to Liverpool on August 14.