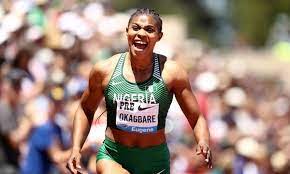 Yet Trayvon Bromell’s approach to the men’s 100m was the polar opposite but no less effective.

The 2016 world indoor champion exploded out of the blocks and had a huge lead at half way. World 200m champion Noah Lyles made up a bit of ground in the second half, but couldn’t catch Bromell, who won in 10.01 to Lyles’ 10.17.

But the cynosure of all eyes on the night was Shaunae Miller-Uibo’s who set a new record time of 49.08 to win the women’s 400m.

The Bahamian Olympic champion ran a well-timed race and  had USA’s Lynna Irby for company on the final bend but she opened up a clear margin on the rest of the field down the home straight to cross the line in 49.08, the fourth-fastest time of her career.

It also chopped 0.26 from the previous stadium record, set in 2003 by Ana Guevara.

Global champions Sanya Richards-Ross, Allyson Felix and Tonique Williams-Darling are among the other past winners on the Hayward Field track, so Miller-Uibo will gain a boost in confidence knowing that she has out-performed such legendary athletes at this venue.

“The 400 is my favourite event, so I love coming in and trying to figure it out and having some fun with unravelling the secrets of it,” said the world silver medallist. “We’ve been really working on getting our strength up and now that we are in the middle of the season we are going to work on speed and getting ready to put down some great performances in the 200s.”