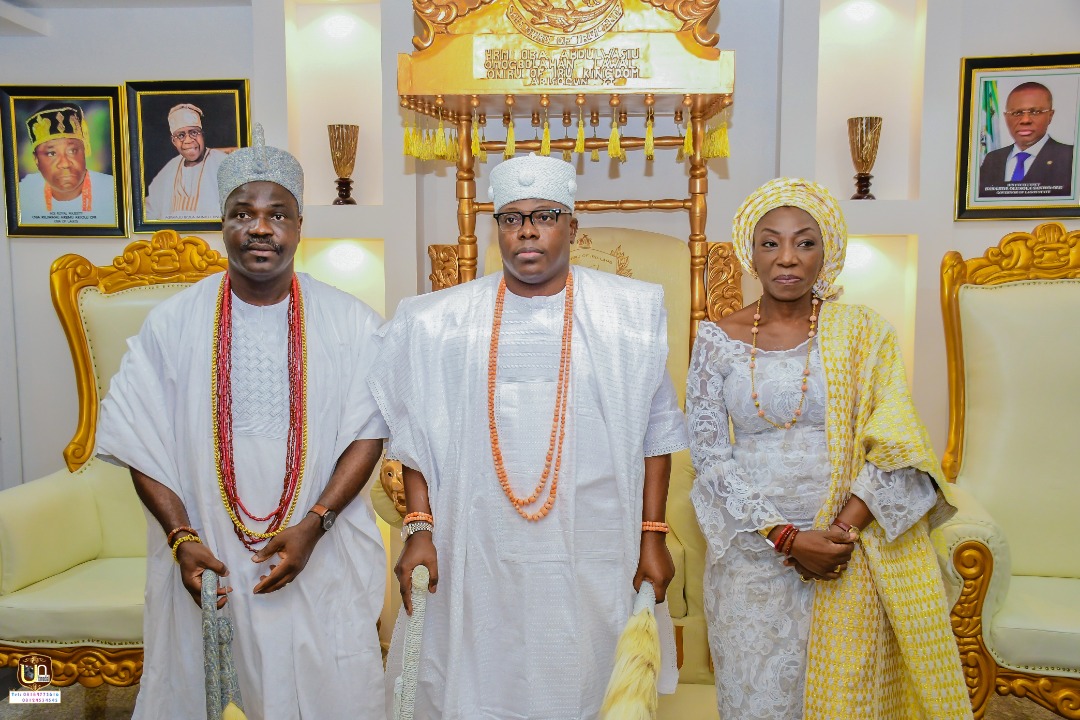 The Olugbon of Orile Igbon, Ogbomosho, and Vice Chairman, Oyo State Council of Obas, His Royal Majesty, Oba Francis Alao has expressed great confidence in the ability of the Oniru of Iru Land, Oba Omogbolahan Lawal, Abisogun II to use his experience in governance prior to his ascendancy to the throne to bring development to his kingdom.

Oba Francis who said this today in Lagos when he paid a courtesy call on the Oniru explained that he had seen the expertise showed by Oba Lawal while he was a Commissioner in Lagos State and expressed assurance that the people of Iru Land had made the right choice in enthroning him.

He further stated that with the Oniru’s unique leadership skills and peace loving attitude, the people of Iru Kingdom should not only co-exist peacefully but should support him in order to bring relevant development to the Kingdom.

“I have had acquaintances with the Oniru prior to his kingship; his pedigree matters to me and I am coming forward today to give him a royal blessing. I can see some qualities of great leadership in him. He is very cerebral; he has a very high personality and great leadership skills.

“I know one thing for sure; it is only God that makes king. All that concerns us is that God has crowned him and he must forge ahead with that mission which God has given to him.

“He is a gentle man by essence and I know for sure he will toe the line of peace so that the people of Iru Land can coexist peacefully in order to bring out the relevant development to the environment. He has been crowned and kingship is about destiny. His destiny has brought him this far. I pray that God Almighty help him to sustain it,” the Olugbon averred.

Oba Alao noted that traditional rulers had an important role to play in national development and that can only happen when they speak true to the power.

He noted that many traditional rulers in the country had acquired a lot of professional experiences in various fields before ascending the throne stressing that such experience could be brought to bear on the quality of advice given to people in government hence he urged his brother traditional rulers to continue to lend the government a lot of advice that will help shape the country for the better.

“Traditional rulers’ role in national development happens when we speak truth to the power. Those who know me in the whole of South-West know this about me. I speak truth to the power. Although our role is advisory, but that does not mean that we should not come out and tell them in order to enhance true governance in the State, Local and Federal levels especially at this point in our country today. A lot of things are not going alright and we need our traditional rulers more now.

“We have someone like Oba Omogbolahan Lawal who has had experience in governance; he has been a Commissioner three times at the State level and he was once the Aide-de-Camp (ADC) to a former Governor of Lagos State. He has a lot of experience. There are many of us like that; there are doctors, retired Generals, e.t.c. We can lend the government a lot of advice that will shape this country to a proper perspective,” Oba Alao asserted.

He explained that some of the issues the country was facing have to do with economic problems and there is no way to solve an economic problem without sorting the political issues first and vice versa; as such, he stated that traditional rulers should continue to pray that God Almighty would intervene in the country’s affairs.

Responding, the Oniru of Iru Kingdom, Oba Lawal thanked the Olugbon for the visit, his words of advice and prayers adding that he would continue to discharge his roles in his kingdom with fear or favour.

He added that as traditional rulers, their roles are multi-dimensional as they are the closest to the grassroots hence their role as advisers of the government had to be viewed seriously and discharged with utmost sense of responsibilities.

“As a traditional ruler, the job is multi-dimensional. You are a divisional police officer, a pastor, a Imam, you are also a magistrate. As an Oba, the ball stops on your table; as such, you have to talk less and listen more. Also, you should never be impulsive. You don’t have to make a decision in haste because whatever you say is the final word.

“Obas are the closest to the grassroots. We get better feedbacks than the people up there and based on this, it is important for us to give advice to the government which we always do. Again, our role remains advisory rather than constitutional.