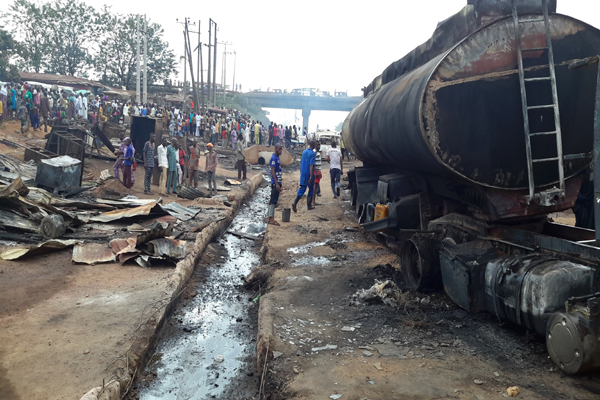 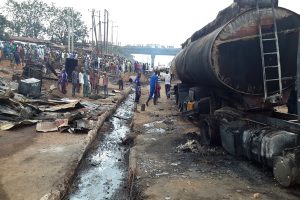 30 shops, 16 vehicles razed
One person died yesterday in Ibadan, the Oyo State capital, when a fuel-laden tanker burst into flames on the Lagos-Ibadan highway.
Thirty shops, four trailers and 12 commercial vehicles were burnt at Oremeji-Agugu in Ona-Ara Local Government Area.
Some commuters were injured.
The incident, which occurred at 6:30 am, was said to have been caused by a Jigawa-bound truck, registered as KZR 418 XA, loaded with wheat.
The Nation gathered that the truck’s driver lost control while trying to overtake another truck carrying pasta and noodles.
The front section of the Jigawa-bound truck, eyewitnesses said, came off, ramming into a NIPCO fuel tanker parked on the roadside.
The fuel tanker burst into flames when its content spilled on the road.
Petrol attendants at Fakinlayo Filling Station close to the scene shut the station.
Owners of the razed shops broke down in tears.
Nurudeen Alimi, driver of a trailer registered JJJ 363 XB, owned by a logistics company, relived his escape.
He said: “I parked my truck by the roadside to check a faulty engine. Then I saw a wheat-laden trailer trying to overtake another trailer.
“The wheat-laden trailer lost control and broke into two. The head rammed into a NIPCO tanker parked at a distance behind my truck and there was a bang.
“Before I knew what was going on, the content of the fuel tanker started spilling on the road. I fled the scene, because I knew what would happen next.
“Just before I ran a few metres, the tanker went up in flames. From where I stood, I could see passengers rushing down and scampering in various directions.
“Nobody died; but some of them were injured as they attempted to flee.”
A roadside trader, who simply identified herself as Mrs Amope, wept uncontrollable where her wooden shop stood before the inferno.
“Where will I start? I just bought goods to stock up my shop with some money I borrowed.”
She was led away from the scene by sympathisers.
A lotto operator, Wale Olalere, whose kiosk was razed, said he was in bed when he got calls, informing him of the incident.
“When I got calls, I got up and came here. As you can see, I cannot recognise the spot where I had my kiosk. Everything I left in the kiosk, including my lotto machine, has been burnt. I don’t know what to do, because this is where I get my daily bread.”
A resident of Oremeji, Alhaji Kehinde Abass, said: “We were in the house when we heard shouts of fire from our houses and we came out and saw a huge fire. “But we were helpless and ran for our safety too. If the truck had carried petrol, the situation would have been worse.”
Fire fighters from Oyo State Fire Service, who moved to the scene at 7am, were prevented from working by hoodlums looting pasta and noodles. The fire fighters got to work after intervention by a team of soldiers, riot policemen and Civil Defence Corps.
Adeleke Isiaka, who led the fire team, said: “We responded to the distress call and we got here on time. But 20 minutes after, we were prevented by hoodlums looting on the scene. We were able to put out the inferno within a few hours. I can confirm there was no life lost.
For 10 hours, travellers were stranded on the highway. Vehicles coming from Lagos diverted to the opposite lane, causing a gridlock. Officers of the Federal Road Safety Corps (FRSC) had a hectic time controlling traffic.
FRSC’s Oluyole Unit Commander Mrs. Titilayo Olayiwola said investigation was on to ascertain the cause of the incident.
Police spokesman Adekunle Ajisebutu said: “Immediately we got the news, we contacted the Fire Service. But for the quick intervention of the firemen, the havoc would have be worse. We drafted policemen to the scene and the report we got is that 10 vehicles and several shops were burnt.”
The driver of the Jigawa-bound trailer was said to have fled the scene.