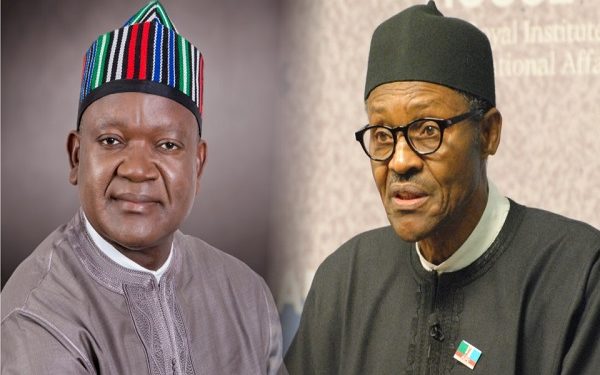 Four days after he narrowly escaped an armed attack, Benue State Governor Samuel Ortom on Tuesday met with President Muhammadu Buhari in Abuja over the incident that caused ripples across the country.

Ortom told reporters after the closed-door meeting at the Presidential Villa that they shared ideas on how to manage the security situation in the country.

He appealed for the moderation of comments on the attack since, according to him, Nigeria is already sitting on a gunpowder keg.

Buhari had on Sunday ordered security agencies to carry out what he called an “open and transparent” investigation into the attack. He also advised that the incident should not be politicised.

Ortom was attacked Saturday by about 15 armed herdsmen on his farm at Tya-mu, along the Makurdi-Gboko Highway. He disclosed shortly after the incident that he ran about one kilometre to save his life.

The Nigeria Governors’ Forum (NGF), political parties, and groups had also on Sunday described as shocking, the attempt to cut short the life of the governor.

A group, the Fulani Nationalistic Movement claimed responsibility for the attack.

Narrating his ordeal again after the meeting with Buhari, Ortom added that the President agreed with him that no person or group should be treated as a sacred cow.

According to him, the suspected herdsmen trailed his convoy to a riverbank where he was on foot with his security details and opened fire on them.

He called on Nigerians, especially politicians, to leave anxiety about the 2023 elections for now and pay attention to the insecurity in the country.

The governor said: ”I want to let Nigerians know, especially those who are responsible for making inflammatory statements; we’re sitting on a keg of gunpowder, everybody’s not in doubt in Nigeria today about the security situation and without security, there can be no meaningful progress going on.

“It is therefore important for us all to put heads together and do the things that are lawful. Let us protect the provisions of the Constitution of the Federal Republic of Nigeria so that everybody will be secure.

“Let there be equity, fairness, and justice. These are what I stand for. I believe that as my President, I do not want to talk about the recommendations. I have been able to recommend in some measures, and most of them agreed that nobody should be a sacred cow.

“If people are found wanting, they should be prosecuted. And I think this is what is good.”

Ortom also dismissed insinuations that the attack on him was stage-managed. He expressed sadness over such thoughts.

His words; ”I want to advise like I said earlier, Mr. President did advise when he was condemning the attack on me, and pleaded with Nigerians that they should not politicise this matter.

“I want to appeal; I want to beg everyone that we should not politicize the issue of attempted assassination on myself.