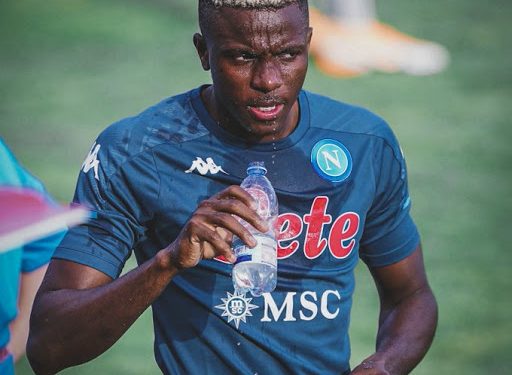 According to the CIES Football Observatory, Osimhen has a transfer value of 62.2 million euros- even though he joined Napoli from Lille for 81.3 million euros.

The CIES Football Observatory considers a player’s age, performance, length of contract, club success and wealth before releasing their list.

And in their latest release, Osimhen is more valuable than Arsenal’s Nicolas Pepe, but behind Salah, Mane and Hakimi.

Salah is Africa’s most valuable star with a transfer value of 134.0 million euros followed by his Liverpool teammate, Mane, who is valued at 123.8 million euros.

Hakimi, who joined Inter Milan from Real Madrid last summer, rounded up the top three with a value of 113.7 million euros.

Meanwhile, Manchester United’s Marcus Rashford has overtaken PSG’s Kylian Mbappe as the world’s most valuable player according to the report. Rashford has a value of 165.6 million euros followed by Erling Haaland, who is valued at 152.0 million euros.