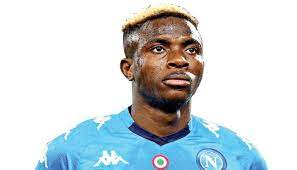 The Nigerian has missed the Partenopei’s last three games against Spezia, Glasgow Rangers, and AC Milan, which they won.

He also missed the Eagles’ friendlies against Algeria.

“Training resumed yesterday (Monday) with Osimhen and Politano, who are continuing in their respective recovery tables,” Calcio Napoli stated on Tuesday.

“It is precisely the aspect of injuries that is the least worrying at the moment because so far the prevention work carried out by the technical staff and by the medical staff head doctor, Raffaele Canonico, worked well.

“Osimhen was a victim of a muscle problem, however typical of an attacker with his characteristics.”

Despite his return, Napoli will not rush back the former Lille striker back to action, according to the Italian media.

“Osimhen is about to return, there are still a few days left, something more than a week, to see him on the pitch to train with his teammates.

“To see him again in the stadiums, in Italy and Europe, we will have to wait a little more, probably at least until October 9, the date of the match against Cremonese, round-trip matches with Ajax in the Champions League,” Tuttonapoli reports.

The 23-year-old has scored two goals and provided one assist for Napoli this season against Hellas Verona and Monza, but could have scored more according to Kickest – an Italian statistics website.

The Eagles striker has missed seven big chances in five league games this season – two more than Tammy Abraham and three more than Paulo Dybala, who both sit in second and third position respectively.