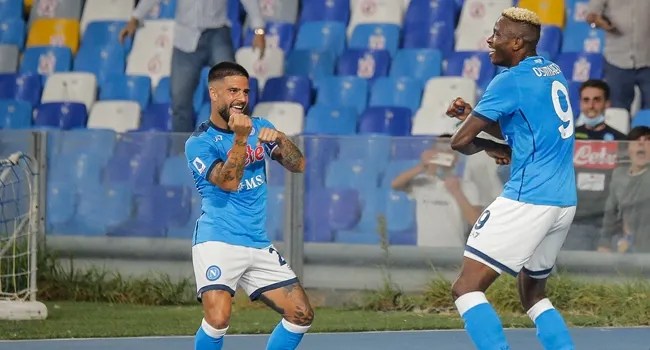 Napoli maintained their perfect start to the Serie A season on Sunday with a 2-0 win over Cagliari which ensured they reclaimed top spot, while Lazio won an eventful derby 3-2 to down Jose Mourinho’s Roma.

Luciano Spalletti’s side cruised to their sixth victory in as many league games against a Cagliari team coached by former Napoli manager Walter Mazzarri thanks to Victor Osimhen’s sixth goal in all competitions this month and Lorenzo Insigne’s second-half penalty.

They are two points ahead of AC Milan after another confident display that ends a week in which they scored 10 goals without reply in three league matches.

Next weekend Napoli travel to Fiorentina in what will be the first true test of their title credentials, as their 2-1 win over Juventus earlier this month came against a team missing a host of starters.

They made easy work of a passive Cagliari, with Osimhen making it four Serie A goals in five appearances this campaign in the 11th minute when he met Piotr Zielinski’s low cross with a typically assured finish.

Osimhen was involved again when a low-key match was settled in the 57th minute, the in-form Nigeria attacker being cleaned out by Diego Godin and Insigne lashing home the subsequent penalty to ensure a simple win.