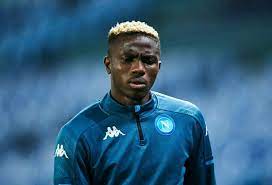 Manchester United manager, Erik ten Hag, is interested in acquiring the services of Nigerian striker, Victor Osimhen but the Red Devils have made it clear that they will not be meeting the €100m price tag that Napoli have slapped on their star striker.

Sky Germany reported that the English topflight club have made Osimhen one of their top targets, but they find the price tag Napoli have put on his head ‘crazy.’

Osimhen is one of the most coveted forwards in Europe following his remarkable goalscoring exploits with Napoli over the past 18 months. The 23-year-old bagged 14 goals in 27 games last year and has already plundered nine goals in 11 matches this term for Luciano Spalletti’s side.

The Nigeria international contributed 18 goals in 32 games last season and Napoli can’t be blamed for demanding upwards of £80m for the 23-year-old.

Osimhen has other admirers in the Premier League and there have been links to Tottenham Hotspur.

It’s hard to imagine Tottenham spending £86m on a new striker, unless Harry Kane is on his way out, which is unlikely.