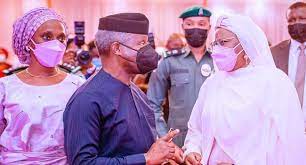 Vice President Yemi Osinbajo has described the First Lady, Aisha Buhari, as a worthy partner of the federal government headed by her husband, President Muhammadu Buhari.

Mr Osinbajo spoke at the launch of a book on Mrs Buhari at the Presidential Villa, Abuja, on Thursday.

The book titled “Aisha Buhari – Being Different” was written by the Senior Special Adviser to the President on Women Affairs and Administration, Hajo Sani.

The 46-page book with 10 chapters is a memoire of the first lady from childhood to date.

Mr Osinbajo said the First Lady was associated with values of courage, integrity and selflessness.

“History has shown that it doesn’t matter how many degrees you have or how many titles precede or honours follow your name, or how high the position you hold,” he said.

“The rare privilege of public service can only be justified by courage, integrity and selflessness. To these, Aisha Buhari adds being yourself, being different.

“Hajo Sanni’s book seeks to document the practical work she has done in the past five years, but it begins with a detailed and sensitive chronicle of childhood years and her growth as a woman, wife and mother,” he said.

“It also highlights her evolution from a silent supporter of her husband’s political adventures to an active mobilizer and campaigner that played a major role in selling him to the Nigerian electorate.