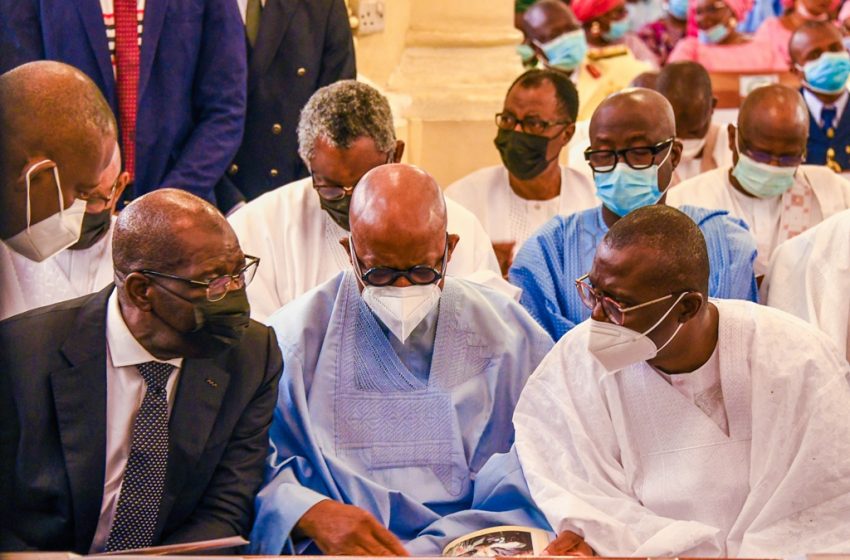 …He Lived An Extraordinary Life – Osinbajo

Speaking at the event attended by hundreds of Anglican Bishops and priests, religious leaders, politicians, captains of industry, entrepreneurs, as well as family, friends and associates of the deceased, Vice President Osinbajo said late Shonekan lived an extraordinary life.

Osinbajo, who described the late Shonekan as a man of destiny just like Nigeria is a nation of destiny, said the former Head of Interim National Government had respect for all and there was a way he carried himself through life.

The Vice President also praised Shonekan’s contributions to Nigeria, first as a business guru and later as Head of Federal Government, adding that the deceased believed that national development was achievable if there was a deep collaboration between the public and private sector.

“He is a man of destiny just like Nigeria is a nation of destiny. He believes that national development is achievable if there is a deep collaboration between the public and private sector.”

In his sermon, former Primate and Archbishop of Abuja Diocese, Anglican Communion (Church of Nigeria), Most. Revd Peter Akinola, said the late Shonekan put his life on the line for the sake of Nigeria by serving as the Head of the Interim National Government during the turbulent time in Nigeria’s political history.

The clergy said Shonekan had done that which God enabled him to do for himself, his family, the church and Nigeria.

The Bishop said that many people advised Chief Shonekan not to take up the job of heading the interim government because of the risk of a coup, but Shonekan considered Nigeria to be more important.

The Bishop who noted that even the church refused to give the late Shonekan the benefit of the doubt while some political opportunists demonised him and called him unprintable names.

“He put his life on the line for the sake of this country. Perhaps, we would like to know that Chief Shonekan was not completely unaware that the coup would take place.

He said Chief Shonekan in his calm and unflappable manner, steered the course of the country, during his tenure as Head of the Interim National Government until the military intervention that followed, noting that it was a courageous thing for him to do, at such a turbulent time in Nigeria’s history.

Speaking on Thursday at the Wake Keep Service and Night of Tributes for Ernest Shonekan held at Victoria Island in Lagos, Governor Sanwo-Olu described the former Chairman and Managing Director of the United Africa Company of Nigeria (UACN) as a foremost and highly respected industrialist and corporate administrator; a first-class boardroom guru with an enviable track record.

The Governor said whether in the boardroom or in the Council Chamber, the late Shonekan could be counted on as a wise, calm and mature statesman.

He said Shonekan heading UACN in his early 40s made him a leading source of inspiration and a role model to generations of high-flying Nigerians behind him.

“Nigeria has lost a truly great man, a true leader and visionary, a man whose immense success in life did not alter his essential humility and goodness.

“The flood of tributes in the wake of Chief Shonekan’s passing attest to the kind of human being he was. You can also look around at the caliber of persons who have gathered here this evening, in his honour,” he said.

Governor Sanwo-Olu while speaking on the legacy of the deceased told the widow of the former Head of Interim National Government, Mrs Margaret Shonekan, his children, grandchildren, and the entire family, to know that “his place in our hearts will never be diminished.”