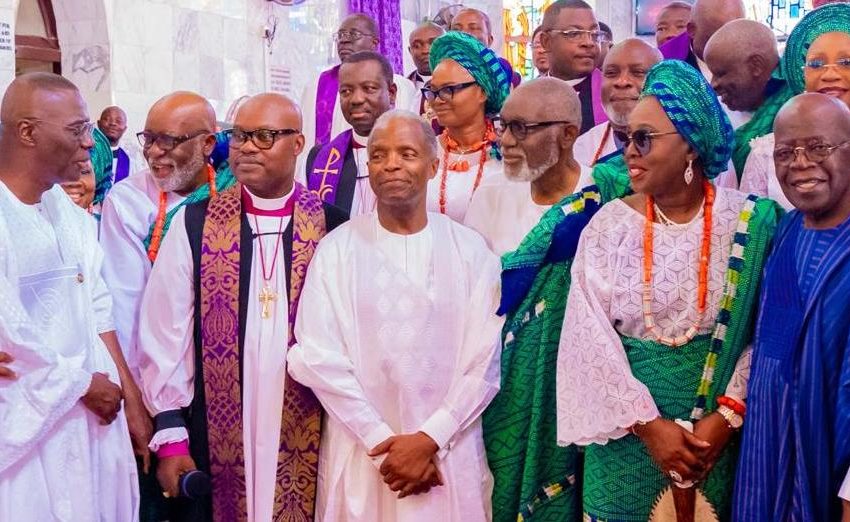 The funeral service was held at the Cathedral Church of St. Andrew, Owo, Ondo State and was presided over by the Bishop of the Diocese of Owo, Church of Nigeria, Anglican Communion, The Rt. Revd Stephen Fagbemi, Ph.D.

It was attended by hundreds of Anglican and other denomination bishops and priests, religious leaders, traditional rulers, judges and lawyers, politicians and captains of industry, as well as family and friends of the deceased, people of Owo community and Ondo State.

Speaking at the event, Vice President Osinbajo commiserated with Governor Akeredolu and his family on behalf of President Muhammadu Buhari and the Federal Government over the demise of the late evangelist.

He said the late Akeredolu served God, her family, the church and community passionately during her lifetime.

“It is a time to celebrate because of great things she has done. The life of our mother, Lady Evangelist Grace Akeredolu is a life that is worthy of celebration. This is a woman who served God from the beginning of her life. She served her family, church and community for many years. We thank God for her life,” he said.

Also speaking at the event, Tinubu congratulated Akeredolu and his family for celebrating the demise of the matriarch of the family.

“We thank God for her life for the fact that she has the greatest legacy of a life that is full of achievements, joy and she passed on at ripe age,” he said.

Tinubu while speaking on the need to address the problems facing the country, urged Nigerians not to give up as he promised to do better if elected as next President of Nigeria.

“You cannot give up on us, we will do better. We promise you that to the glory of Mama and for her legacy, we will contribute to the improvement you might want anywhere around,” he promised.

In his response, Governor Akeredolu appreciated all the dignitaries for turning up for the funeral of her mother.

He urged religious leaders to continue to pray for public office holders in the county for them to continue to deliver the dividends of democracy to people.

Speaking earlier, Bishop Fagbemi during his sermon urged politicians, especially those contesting in the next year’s general elections to visit hospitals, schools and other public places for them to know what the people are passing through to form their agenda for the future.

He said the Akeredolu family in Owo has been doing very well for the church and therefore urged others to support the work of God.

Governor Sanwo-Olu had earlier commiserated with his Ondo State counterpart, on the death of his mother, urging Governor Akeredolu, family, friends and entire people of Owo and Ondo State in general to preserve the legacy of love and prayers left behind by the deceased.

Sanwo-Olu in a condolence message issued by his Chief Press Secretary, Mr. Gboyega Akosile, also urged members of the Christian community to immortalise the good name of the late nonagenarian and her service in God’s vineyard.