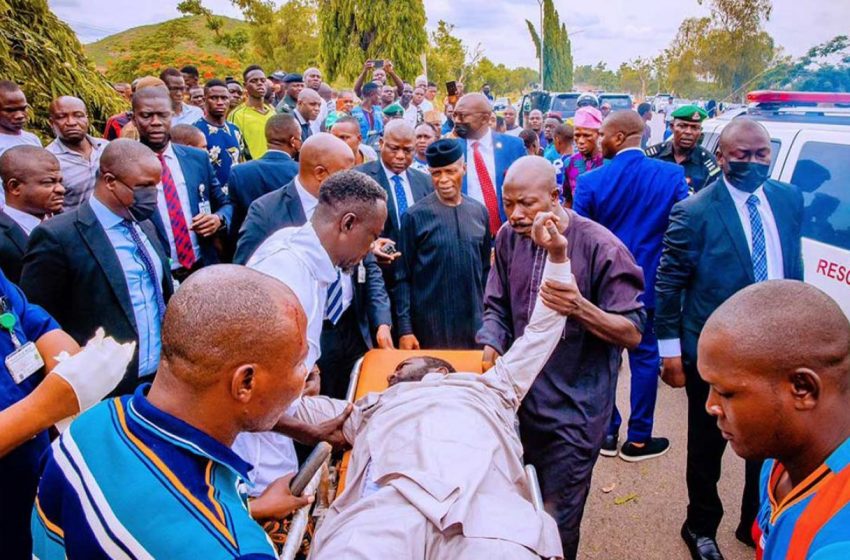 As the dust settles on St. Francis Xavier Catholic Church, Owaluwa in Owo, Ondo State after the brutal invasion by yet-to-be-identified gunmen around 11:30.a.m on Sunday, the Inspector-General of Police, IGP Usman Alkali Baba, has ordered full-scale investigation into the incident to bring to book perpetrators of the gruesome killing of the worshippers at the church.

The IGP has further ordered the deployment of specialised operatives of the Police Explosive Ordnance Disposal-Chemical, Biological, Radiological and Nuclear Explosives (EOD-CBRNE) and other tactical units from the Force Headquarters for a comprehensive investigation, and immediate interception of the villains.

According to police spokesman, CSP Muyiwa Adejobi, “the gunmen, from preliminary investigations, invaded the church with arms and materials suspected to be explosives. Police investigators, who were part of the first responders deployed to the scene, have recovered pellets of expended AK-47 ammunition, while the EOD-CBRNE unit confirmed the use of explosives as fragments of the IEDs used were found and after thorough sweeping of the scene, three unexploded IEDs were recovered at the scene of the incident.

“Further investigations revealed that some of the gunmen disguised as congregants, while other armed men who had positioned themselves around the church premises from different directions, fired into the church. The assailants fled the scene using a Nissan Sunny car with Reg No. AKR 895 AG, which was snatched from the owner, and escaped through Owo/Ute road. The vehicle has been recovered while the owner of the vehicle is currently assisting the police in its investigations.”

Extending his grief on the incident, leader of the Catholic Church worldwide, Pope Francis, has expressed his “spiritual closeness” to Nigerian Catholics mourning the victims of the massacre on Pentecost Sunday.

A telegram sent on the Pope’s behalf said he was praying “for the conversion of those blinded by hatred and violence.”The papal telegram, released yesterday, was sent to Bishop Jude Ayodeji Arogundade of Ondo Diocese by Vatican Secretary of State, Cardinal Pietro Parolin.

It said: “His Holiness Pope Francis was deeply saddened to learn of the horrific attack at St. Francis Church in Owo, and he assures you and all those affected by this act of unspeakable violence of his spiritual closeness.

“In commending the souls of the dead to the loving mercy of Almighty God and imploring divine healing and consolation upon the injured and those who are grieving, His Holiness prays for the conversion of those blinded by hatred and violence so that they will choose instead the path of peace and righteousness.”

VICE President, Prof. Yemi Osinbajo has equally vowed that the perpetrators will be fished out and made to face the full wrath of the law. He stated this, yesterday, when he visited Owo town and the Catholic Church to commiserate with the clergy, community and people of the state. The VP also visited those who were injured at St. Louis Catholic Hospital.

Describing the unfortunate incident as a terrible tragedy and unspeakable evil by depraved minds and terrorists, Osinbajo noted that “the President has already ordered a full-scale investigation of this crime. Without any doubt, those who perpetrated this will be fished out and they will pay for the consequences of this crime.”

Noting the President’s statement condemning the dastardly act, the VP added that, “this barbaric act is one that has to be condemned by all. But more importantly, we must find the perpetrators and they must be punished, and we must set an example.

“Anyone who will go into a place where there are children, elderly people and shoot them, throw explosives at them, cannot be dignified by their description as humans.”