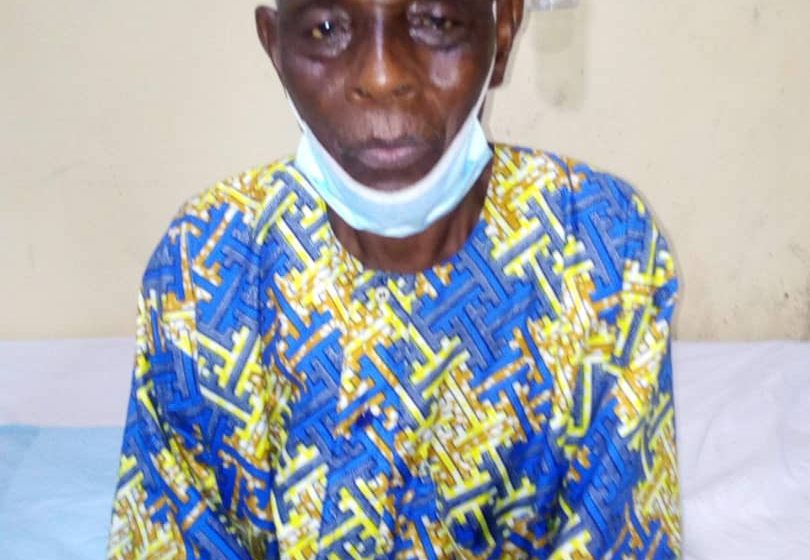 Mr. Lasisi Hassan (88 years), before he was discharged after the successful eye surgeries at the General Hospital, Ijede.

The duo of Mr. Lasisi Hassan (88 years) and Mr. Afeez Lawal (52 years), who successfully underwent maiden eye surgeries at the General Hospital, Ijede, have thanked the Lagos State Governor, Mr. Babajide Olusola Sanwo-Olu for his commitment and unflinching support towards improved quality healthcare for citizens of the State.

Speaking before discharge from the hospital recently, Mr Lasisi, who was diagnosed with a bilateral cataract said he was very happy and appreciative to the Almighty God, Governor Babajide Sanwo-Olu and the Management of the facility for giving him the opportunity to regain his vision in the right eye.

His words: “I am very happy that I can see now, I could barely see with the right eye when I came to General Hospital Ijede. Also, with the modern infrastructure, qualified professionals and state-of-the-art equipment that l saw, I had no doubt in my mind that the surgery was going to be successful. I appreciate the efforts of the Lagos State Government for improving the health sector in the State. It was never like this before, may God continue to bless our Governor.

On his part, Mr. Azeez Lawal, who was also diagnosed with bilateral cataract on his left eye corroborated what Mr. Lasisi said, stressing that without the commitment of Governor Babajide Sanwo-Olu to improving the health sector, the successful surgeries would have been impossible at the facility.

“I could not see anything with my left eye before the surgery took place, but now I can see clearly. I thank Mr. Babajide Olusola Sanwo-Olu for his great achievements in the health sector. He is really doing a great job. We pray that God will continue to guide him aright in his determination to provide succour and dividends of democracy to all residents of the State”, he stated.

According to him, Governor Sanwo-Olu is not only doing great things in the Health sector, but also in other areas such as Housing, Transportation, Education and Security sectors among others, stressing that the recent commissioning of important projects in the State underscore the present administration’s efforts to improve the standard of living of all Lagosians.