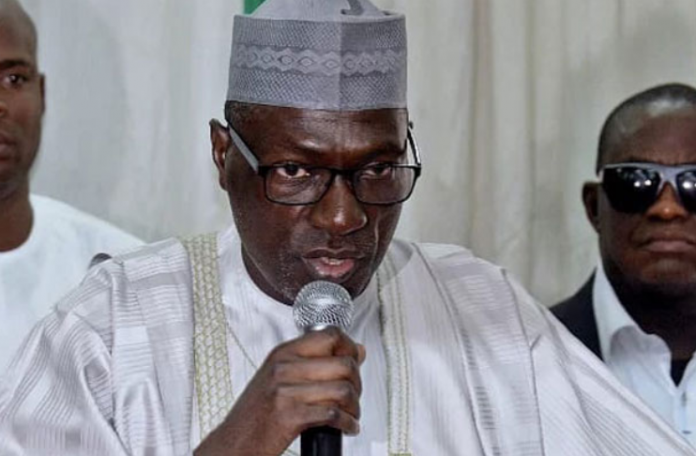 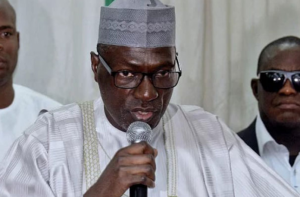 • Sheriff Blames Mimiko For Defeat
• Governor, Oke Congratulate Akeredolu
The Ahmed Makarfi-led National Caretaker Committee of the Peoples Democratic Party (PDP) yesterday called for a total cancellation of the governorship election held in Ondo State at the weekend.
Accusing the Independent National Electoral Commission (INEC) of complicity in the alleged rigging of the polls, the faction disclosed its plan to contest the result at the tribunal.
But the Ali Modu Sheriff faction declared that the PDP lost the governorship election because of impunity allegedly displayed by some governors within his party.
The reaction made at a press conference in Abuja yesterday by Sheriff’s deputy, Cairo Ojuogboh was in response to an accusation by the caretaker committee that the faction acted the role of a spoiler during the election.
The caretaker committee, in a statement by its spokesman, Prince Dayo Adeyeye said that Sheriff’s consistent claim to the office of chairman “is a continuation of the plans to cause mayhem in our party but nature and fair justice have taken care of his desperation.
It is amusing that these musketeers could be accusing the national caretaker committee of being the reason the party is facing challenges in terms of unfavourable election results especially in Edo and Ondo states when it is not a secret to all Nigerians that these non-PDP members were the ones who frustrated the party on all fronts.”
The committee drew attention to an alleged directive the Sheriff group gave to its supporters to vote for the APC. “It is common knowledge that Barrister Jimoh Ibrahim whom they pushed as front at the Ondo polls before the Appellate Courts reversed the anomaly, openly campaigned for their party, the APC..”
The faction described the result as declared by INEC as a charade, and said it was not the true reflection of the will of the people of Ondo State. “It is common knowledge that the APC agents openly bought votes of the electorate in the full glare of security operatives who did nothing to prevent such dastardly violation of the electoral law.
“In view of the fact that the election was blatantly manipulated from the beginning to the end to favour the APC, we vehemently reject the results. We call on the judiciary to redeem Nigeria’s image on this matter as we request the total cancellation of the election in Ondo State, “ it said.
Addressing newsmen at a press conference yesterday, Ojuogboh traced the crisis in Ondo PDP to when Governor Olusegun Mimiko returned to the party in 2014.
He said: “All the PDP members led by Olusola Oke left the party for him. In choosing a candidate to succeed him, he did not allow the PDP members to buy forms. He mainly anointed Eyitayo Jegede who was returned unopposed.
“Party members cried to the high heavens that Jegede is from the central zone where Mimiko hails from. Their cries fell on deaf ears.
“On the other hand, the authentic primary was conducted where six participants were involved and Ibrahim emerged. Jimoh hails from the South. He campaigned vigorously and convinced the people to vote for him. But Mimiko will not allow him carry the party’s flag. Mimiko used the instrumentality of state government to overwhelm Ibrahim but could not overwhelm the masses and voters. Of course the result is out there for all to see.”
Meanwhile, Mimiko of the Makarfi camp has congratulated the Governor-elect, Mr. Oluwarotimi Akeredolu (SAN) of the All Progressives Congress (APC). In a statement by his Chief Press Secretary, Eni Akinsola, Mimiko said:

“It is incumbent upon me as governor to facilitate a smooth transition between my government and the incoming one. I will, to this end, provide the ambience for a smooth and seamless transition process.”
Also, the candidate of the Alliance for Democracy (AD), Chief Olusola Oke congratulated Akeredolu even as he decried the alleged monetisation of the election process which produced him.
Oke who spoke in Akure commended both the INEC and the security agents for being fair in the handling of their duties, but expressed regret that the open and free use of money to purchase votes during the election by the ruling parties remained a sad commentary on the nation’s electoral process.Others who congratulated Akeredolu yesterday include Governor Abiola Ajimobi of Oyo State and an APC chieftain in Delta State, Olorogun Otega Emerhor.