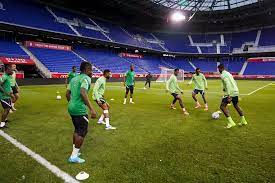 Super Eagles coach, Jose Peseiro, has showered plaudits on Ademola Lookman, Terem Moffi, Sanusi Zaidu and Oghenekaro Etebo, after his side recorded a historic win on Monday, The PUNCH reports.

Peseiro’s side annihilated Sao Tome and Principe 10-0 with goals from six different scorers.

The coach made four changes to the side that played against Sierra Leone on Thursday, with the quartet coming on for Samuel Chukwueze, Joe Aribo, Sadiq Umar and William Troost-Ekong.

All four players were involved in the goals scored in the encounter.

Both Moffi and Lookman scored their first goals for the team just as Etebo was also on target, while Zaidu on his part, made an assist for Moffi’s second goal in the game.

Speaking after the game, Peseiro said the players who followed his instructions.

“I want to improve our organisation on the pitch because we didn’t train too much with them and we wanted to introduce our ideas,” the Portuguese said after the game.

“The match was good because they tried to follow our organisation. Our style, our ideas followed it. They tried and the guys who were introduced in the match did well. I select players to start and they did well.”

The Eagles now lead Group A with six points from two games. They also have a superior goal difference of +7 ahead of second placed Guinea-Bissau, who they host in their next fixture in September.

Sierra Leone are third with a point, while whipping boys Sao Tome and Principe occupy the bottom of the group.