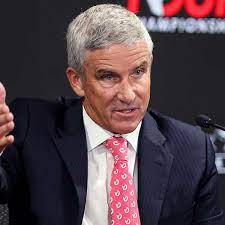 The Saudi-backed LIV Golf series offered players “astronomical sums of money” to breach their contracts so they could help “sportswash the recent history of Saudi atrocities”, a lawsuit from the PGA Tour claims.

The PGA Tour has launched a counter claim against a lawsuit from LIV Golf.

LIV’s lawsuit was filed after the PGA suspended and fined players who left the Tour to join the breakaway series.

However, in its counterclaim, the PGA says: “A key component of LIV’s strategy has been to intentionally induce Tour members to breach their Tour agreements and play in LIV events while seeking to maintain their Tour memberships and play in marquee Tour events, so LIV can free ride off the Tour and its platform.”

It goes on to accuse LIV of cynicism and alleges the LIV series is “an effort to use the LIV players and the game of golf” to improve the public image of Saudi Arabia following criticism of its human rights record.

Six-time major winner Phil Mickelson, former world number one Dustin Johnson and Open champion Cameron Smith are among the players to join LIV, which offers a $25m purse at its events.

Mickelson reportedly received a $200m fee for joining LIV, Johnson was said to have received $150m, and when joining the series Smith said money was “a factor” in his decision.

“The Tour has made these counterclaims in a transparent effort to divert attention from their anti-competitive conduct,” LIV Golf said in response to the PGA Tour’s counter lawsuit.

“We remain confident that the courts and the justice system will right these wrongs,” it added.

Earlier this week, Mickelson and Ian Poulter were among four players who asked to be removed from the LIV lawsuit.

They said with LIV joining the claim and in effect representing them, they no longer needed to pursue the matter as individuals.