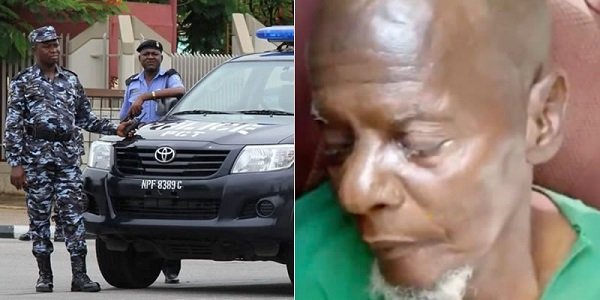 Wakilin is believed to be the leader of a group of herdsmen, terrorising farmers in Ibarapa area in Oyo State.

Following the expulsion of Seriki Hausa Ibarapa by Sunday Igboho, Wakilin reportedly mounted no-cross zone on farms, sending warnings to indigenes of Ayete in Ibarapa and often boasted that he could not be evicted from the town.

Along with his battalion of herders, he was said to have displaced farmers and forcibly invaded their farms with cattle, shooting farmers who crossed the no-cross zone line he created.

Due to his deadly atrocities, farmers deserted their farms and could not harvest their crops.

Also at the weekend, two farmers were found dead on their farms in Ekiti. They had gunshot wound in their bodies. They were believed to have been killed by herdsmen.

The police in Oyo State confirmed the arrest of three members of OPC after they arrested Wakiliin.

The police said the men are being interrogated for their involvement in arson and murder while carrying out the arrest.

Police spokesman Olugbenga Fadeyi said the Commissioner of Police had directed that Wakilin be moved to the hospital.

He said “The Oyo State Police Command would like to inform the general public that at about 0900 hrs of date (7th March 2021), information was received that a group of persons, (later found out to be members of the Odua Peoples Congress (OPC), had invaded Kajola community in Ibarapa axis of the state.

“The invasion was reportedly aimed at arresting one Wakili, a Fulani by tribe, who is alleged to be the sponsor and mastermind of various criminal attacks against the people/farmers of Yoruba origin in the community.

”The State Commissioner of Police has quickly moved into action and preliminary findings revealed that some OPC members went to Kajola community in Ibarapa North Local government Area of Oyo State.

”While there, the house of Wakilin was set ablaze, while a female (the identity of who is yet to be ascertained) was burnt in the fire and Wakilin (about 75 years old and blind) with two other persons were picked up.

”The three of them are presently in the custody of the Police. The Commissioner of Police has directed that Wakili (due to his frail appearance and state of health) be moved to the hospital, while others are being interrogated. Others being interrogated are the OPC members involved in the arson and murder.

“In conclusion, anybody that has any case against Iskilu Wakili should report it to the State Criminal Investigation Department, (CID), Iyaganku, Ibadan for discreet Investigation.”

According to a statement by his special assistant Kehinde Aderemi, Adams, the Aare Ona Kakanfo of Yorubaland, said: “I am happy that the notorious kidnapper had been captured alongside three others. It is a good development and a positive signal to other criminal elements that the South-West is no longer an abode for bandits, kidnappers, and criminal herders

“I commend all the members of the joint security team that has made this possible because with the video at my disposal, it was purely a neat job”

Recounting how Wakilin was arrested, the Igangan Development Advocates, the umbrella body of youths and residents in Igangan, which commended the OPC for what it described as “a valiant display,” said: “On Saturday, 6th March 2021, the men of OPC under Iba Gani Adams leadership effected the arrest of one Wakilin, a notorious leader of a violent gang that has unleashed terror on the people of Ayete, Tapa and Igangan in Ibarapa for a long time.

”Iskilu Wakilin had recently taken over the Kajola agric landscape of Ayete, daring farmers and security operatives to cross into his territories.

”With his growing population of herdsmen and weapons such as AK47, Iskilu practically paralysed the economic activities of the residents of Kajola, Magbeje, Gbangbangere, Konko and environ. Farmers abandoned their farms and pending harvest, many farmers and traders, who dare to cross the no cross over red flag if Iskilu were maimed and shot at, leaving billions of property destroyed in his wake.

”The OPC team, led by Chief Adedeji Wole, rose to the occasion. First, they truncated the recent kidnapping attempt by Iskilu’s goons and got the kidnappers arrested just a few weeks ago.