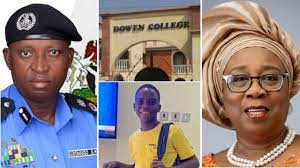 The police in Lagos say they have begun an investigation into the death of Sylvester Oromoni, a student of Dowen College in Lekki Lagos.

The student died on Tuesday, after he was allegedly tortured and given a harmful substance by some senior students in the school, over his refusal to join a cult group.

In a statement released on Saturday by Adekunle Ajisebutu, the police spokesperson, the police said investigation has started, despite having not received a formal report of the incident.

“The Lagos State Police Command is not unaware of the reported death of one Sylvester Oromoni, a 12-year-old student of Dowen College, Lekki, Lagos which is currently going viral on the social media.

“The Command wishes to inform the public that, although no formal report of the incident was made to the police, the Commissioner of Police, upon hearing about it instantly directed the Divisional Police Officer, Maroko Division under whose jurisdiction the place of incident is to immediately visit the school to carry out initial investigation into the incident.

“This directive has been carried out as investigation into the case has since commenced. However, in view of the seriousness of the case, the Homicide Section of the State Criminal Investigation Department, Panti, has also been directed to take over investigation of the case immediately,” the statement reads in part.

The news about the late Mr Oromoni, 12, surfaced on the internet on Wednesday, following a post by his cousin, Perrison Oromoni, on issues surrounding his death.

Mr Oromoni said some students of the school “bullied, harassed, and tortured his late cousin for refusing to join their cult group, which led to his eventual death”.

He said tests and X-rays conducted on the deceased showed that he sustained internal injuries from beatings he received from the students.

Although the school immediately reacted to the allegation, saying it was not true and that the student was sick and treated at school before being sent home, a video of the last minutes of the deceased where he listed the names of his abusers was released.

Following the controversies surrounding the death of the student, the Lagos State government, on Friday, shut the school indefinitely.

“We reassure the family of the late Sylvester Oromoni Junior and Lagosians at large that efforts are being made to unravel the circumstances leading to his demise, even as we reiterate the Government’s commitment to Child Protection,” the ministry said in its statement.

The police have, however, urged members of the public, particularly the deceased’s parents, friends and relatives to stay calm as the police investigate.

Mr Ajisebutu said the Command has deployed all available human and material resources at its disposal to unravel the circumstances surrounding the sad and unfortunate incident.

“While diligent investigation is ongoing, members of the public are advised against taking the law into their own hands. They are also enjoined to refrain from comments that could jeopardise investigation,” the police said.