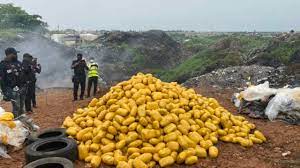 The Lagos State Police Command yesterday, destroyed hard drugs worth over N10 million at a dump site in Ewu-Elepe, a suburb in Ikorodu area of the state.

The illicit drugs, which included 4000 wraps of different kinds of drugs such as Indian Hemp,cannabis Colorado among others, were recovered by operatives of the Rapid Response Squad ,RRS from some suspected criminals .

Kotangora disclosed that the drugs were recovered within four months owing to diligent information by operatives of the RRS.

He said : “We are here to execute the court order in respect of the destruction of hard drugs recovered by the RRS. I assure you that this is going to be a continuous exercise. After this, we still have some other drugs that will be brought here for destruction in accordance with the court order”.

He added that some arrests were made in the process. “ Three suspects were arrested and charged to court. As a result of the arrest , we secured a court order for the destruction of these drugs and we are here with members of the NDLEA, NAFDAC and other relative agencies from the state command”, he stated.

While reiterating the resolve of the command to rid the state of criminal activities, he said, “ there’s no hiding place for any criminal, drug addicts and offenders. Any kind of criminality will be fought to a standstill by the command “.