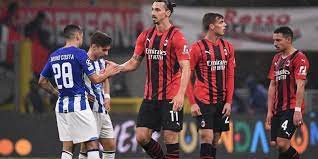 AC Milan needed a Chancel Mbemba own goal to draw 1-1 at home to Porto on Wednesday, a result that leaves the seven-time former European champions on the brink of elimination from the Champions League.

Milan are level on points with Napoli at the top of Serie A having won 10 and drawn one of their first 11 games domestically, but it has been a drastically different story in Europe.

Stefano Pioli’s side lost their first three matches in a tough Group B also featuring Liverpool and Atletico Madrid, and another defeat at San Siro would have confirmed their elimination.

Porto, who beat the Italians 1-0 in Portugal two weeks ago, duly went in front inside six minutes thanks to Luis Diaz, who also scored in the reverse fixture.

Marko Grujic won possession before setting up Diaz, the Colombian taking two touches to steady himself before slotting in.

However Milan equalised just after the hour-mark as substitute Pierre Kalulu’s cross-cum-shot was turned into his own net by Mbemba.

Zlatan Ibrahimovic came off the bench for the home side but he could not inspire them to find a winner, although he did have the ball in the net late on only for the offside flag to cut short the celebrations.