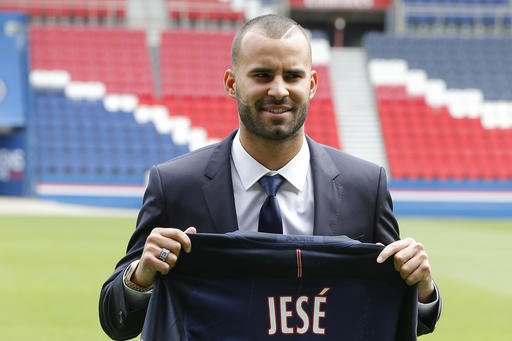 Jese Rodriguez has been sacked by Paris Saint-Germain after a sex scandal.
The former Stoke forward was embroiled in a sex scandal and pictured ignoring social distancing rules at a party with partner Aurah Ruiz, centre.
He was also pictured at a party in Gran Canaria ignoring social distancing rules and without any face masks.
And the French champions have now terminated his contract six months early.
It is understood PSG chief Nasser Al-Khelaifi was tired of the ‘stain’ Jese’s personal affairs were projecting on to the club and took action to cut him loose.
The ex-Stoke forward joined the Ligue 1 side from Real in 2016 but has made just 18 appearances, scoring twice. He accumulated just 22 minutes of action this season before his Parc des Princes stay was cut short.But it is off the field where he is also having trouble.