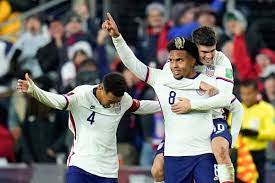 Christian Pulisic and Weston McKennie scored the goals as the United States downed Mexico 2-0 to move to the top of CONCACAF’s 2022 World Cup qualifying race on Friday.

Chelsea star Pulisic nodded home a 74th-minute cross from Timothy Weah just five minutes after coming on as a second-half substitute to put the Americans 1-0 up in Cincinnati.

A late red card for Miles Robinson after a second bookable offence left the US down to 10 men for the closing stages, but US coach Gregg Berhalter’s young side were not to be denied.

The win leaves the United States on top of the eight-team final round of CONCACAF standings with 14 points from seven games.

The top three finishers in the standings qualify automatically for next year’s finals in Qatar, while the fourth place team advances to an inter-continental playoff.

Friday’s win means the US are firmly on course to exorcise the ghost of their 2018 World Cup qualifying debacle, when they failed to reach the finals in a devastating blow for US football.